Sweet Billy Pilgrim, as regular readers will attest, are a band worthy of much attention, but are – unfathomably – not yet at the stage where stadia and arenas sponsored by phone companies and chewing gum manufacturers are pleading them to play a week-long residency.

In response to this lamentable – and hard to understand – lack of enthusiasm, Sweet Billy Pilgrim has turned to the loving arms of Pledge Music, and has offered some unique experiences for early adopters.

Say what you like about the broken state of the record industry, but it is throwing up some interesting new ideas.

Last night, band leader Tim Elsenberg, guitar and vocalist Jana Carpenter, multi-instrumentalist Anthony Bishop and drummer Al Hamer played an exclusive gig in East London for the early adopters who had shelled out their hard-earned in exchange for a first listen of the new album Motorcade Amnesiacs, which is not released until the 24th May.

It’s quite an interesting thing to witness. Although the band know they are amongst friends, this is still the very first time their new songs are to be played outside of the recording studio. Before the gig starts, they are visibly nervous. They might have a killer album that they are about to play in front of a hundred of their most fervent fans, but the elephant in the room remains.

What if the audience don’t like the new songs?

In return, whilst the crowd have more confidence in their favourite band than any other group of like-minded individuals on the planet, to the extent they are willing to pay in advance for the album to be made, there is still a nagging doubt on the back of their mind.

What if their favourite band has come up with 2015’s equivalent of Lou Reed’s Metal Machine Music?

There’s a lot of trust at stake…and yet it is also slightly ridiculous. After all, a band that produced albums as strong as “Twice Born Men” and “Crown and Treaty” are hardly going to come out with a stinker, are they?

It is therefore good to report that based on this first exclusive listen, the new Sweet Billy Pilgrim album is going to be another corker. 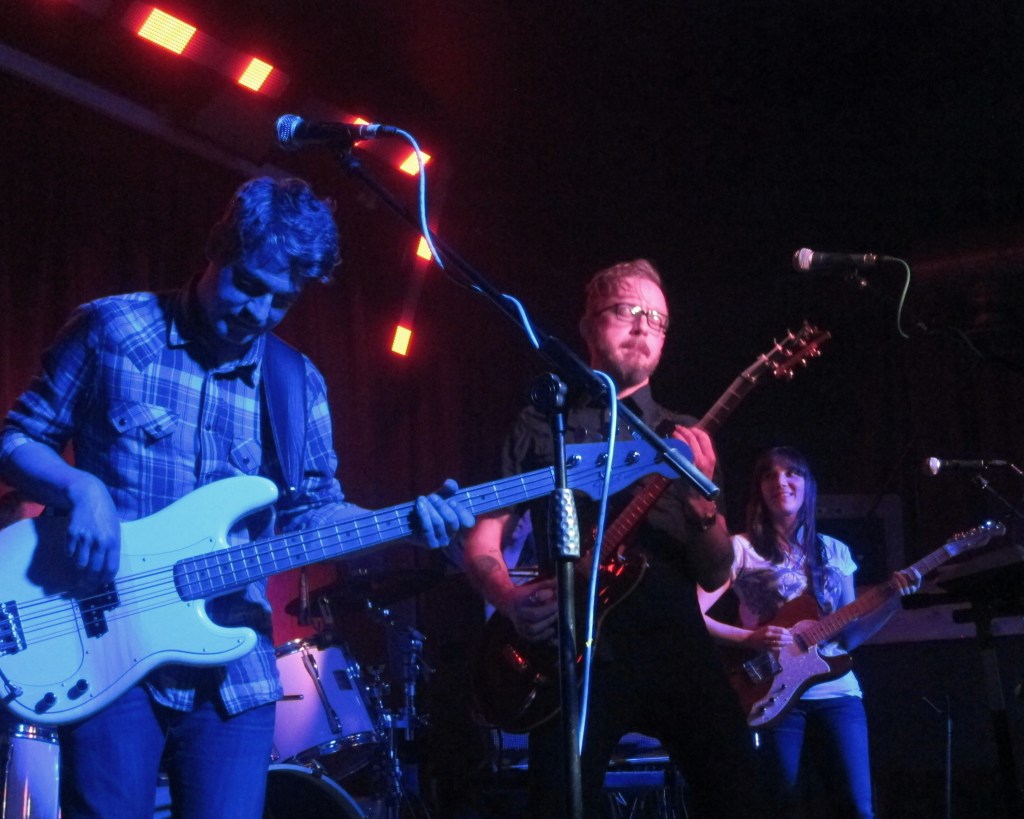 Stand outs include “Make It So”, a lovely tune that begins quietly and builds up to an epic and melodic finish, whilst “Slingshot Grin” reminds me of (of all things) the melodies of Yes (but thankfully without their sheer length of songs), with Carpenter and Elsenberg sharing vocal duties. Perhaps best of all is “Tyre Kickers”, a gorgeous piano-led ballad with vocals by Jana Carpenter.

The gig also gives rise to an interesting audience dilemma, viz. how do you react when the band say they are going to play a few older songs? Don’t want to appear over-enthusiastic for the familiar tunes, given the new songs that are being given their debuts…

The problem is dealt with sympathetically, and “Joyful Reunion”, “Archaeology” and “Future Perfect Tense” get welcome airings in between the half-dozen new songs.

So you heard it here (almost) first. There’s no awkwardness. No uncertainty. The new album is going to be impressive indeed. It’s going to be fascinating to hear the studio versions of these songs that the band are still fleshing out for a live audience.

Like Loading...
‹ Why You Should Hear Drenge’s New Album, Undertow
Everything You Need For Record Store Day 2015 ›