You may not have noticed, but as Father’s Day 2016 approaches, we may be reaching peak vinyl.

A supermarket war has broken out over vinyl sales in the UK, something unimaginable a few years ago unless the fight was this:

Tesco: “You should sell them”

J Sainsbury: “No, You should sell them”…

Aldi: “What’s a vinyl? Can we sell our own brand of vinyl cheaper?”

After testing the market with an exclusive Iron Maiden album release, this year Tesco has released 1,800 copies each of eight records for Father’s Day with four available on coloured vinyl, on sale in 150 stores. Copies of The Jam’s Sound Affects on pink vinyl sold out almost immediately as the album had never been released as a limited edition before. I found my (original) copy for £1 in a charity shop, so it’s arguable whether a limited edition was required, but there you go. Reports came in of feather-haired men and their children scouring the country in a panic for these elusive, exclusive editions.

Tesco also had the Clash’s London Calling in green and pink vinyl, 12 Gold Bars by Status Quo, in gold (obvs) and Searching for the Young Soul Rebels by Dexy’s Midnight Runners in green.

Meanwhile, J Sainsbury stuck a cardboard made rack of eighteen different (normal, non-exclusive) records in 171 stores and then claimed to have “the most vinyl stores on the high street” which is a bit like me putting ten cardboard boxes in my back garden, chucking in some subbuteo players and boasting I own the biggest number of football clubs in the country.

Aldi has resisted selling records, but does offer a record player for £29.99: cheaper than the last Iron Maiden LP, which will be great for toe-dippers but I suspect awful for the longevity of anyone’s records. 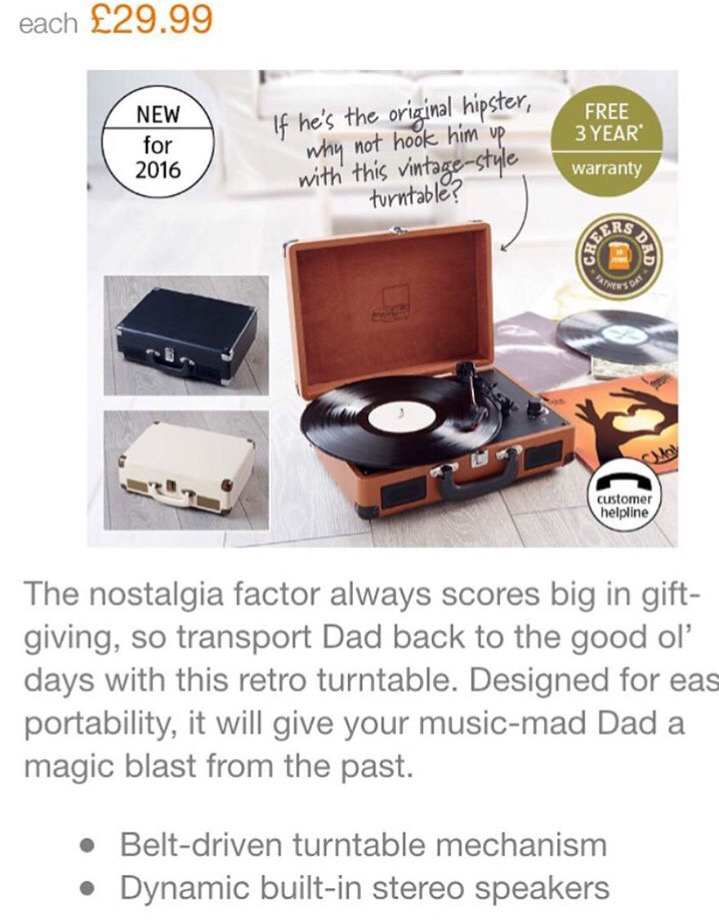 HMV also re-introduced vinyl into all its stores last summer, just three and a half years after calling in the administrators, unable to pay its rent bill and remain a going concern.

Back then – in January 2013 – the retailer looked as doomed as a typewriter ribbon manufacturer.

Founded in 1921, HMV expanded on the back of the rock n roll boom in the late sixties and seventies, alongside Virgin Megastores and Our Price (ask your dad).

By the 1990s HMV had grown to 320 stores, on the back of the popularity of CDs, DVDs and video games. However, a new decade brought challenges to the business model. Faced with iTunes, Amazon’s lower prices, and supermarket pricing power, HMV didn’t have anything unique to offer.

By the time music piracy via Kazaa, Napster et al took off, HMV had really lost what made it special. It wasn’t cheap, it didn’t specialise in bringing anything different or interesting to music fans and staff were simply not of the same calibre as those in independent record shops, who themselves had been going out of business in record numbers.

It was this lack of specialisation that meant the public lost their love of the HMV brand. The staff were reportedly hired and vetted based on their ability to sell rather than whether they were informed about customers’ purchases, or their ability to enthuse about them.

Elsewhere in the retail sector, successful businesses had enthusiastic staff that would be knowledgeable about whatever you bought, be it a bicycle, coffee or hifi equipment. In a music store, where customers can be very enthusiastic this was crucial – and missing in HMV.

Ironically a small chain owned by HMV did have good staff. The eight store Fopp chain did well, not least because its staff came across as music fans as well as employees.

Staff aside, HMV was also slow to react to market changes. Apple launched iTunes in 2001. It took until 2010 for HMV to launch hmvdigital, which tells you all you need to know.

Compared with the low cost online retailers, HMV had too many stores, and when sales fell, the overheads it carried – rent and staff – meant it could not compete on price despite more favourable terms from suppliers of DVDs, CDs and games than the indies.

When HMV moved towards selling technology such as headphones and iPod speakers, this further drained cash from the business, and HMV called in the administrators.

Having had this midlife crisis, HMV did what any other middle aged person would do.

It lost weight, rediscovered vinyl and took up cycling.

It lost weight though. In 2013 HMV had 238 stores across the UK and Ireland – far too many stores with a high fixed cost that had to be serviced no matter what happened to sales. It now has 120 shops in the UK, about half the number of independent record shops that participated in Record Store Day this year.

Which brings us back to the high street vinyl wars. HMV has launched it’s own equivalent of a Record Store Day: Saturday 18th June.

This feels like a good thing. HMV remains a large chain and needs to leverage its size to bring customers something unique, whilst Record Store Day – which has all those exclusive and unique releases – supports all of HMV’s competitors.

HMV is doing some good things. Exclusive in-store events are common: I have briefly met both Ozzy Osbourne and John Lydon at book signings in Oxford Street over the past few years and the 363 Oxford St branch gave away a number of exclusive vinyl records including a Beatles 7″ BBC Sessions vol. 2 single in 2013.

To top all that off, now HMV has its own Vinyl Week, where a selection of LPs are heavily discounted (Patti Smith’s Horses is £12.99, Royal Blood are £9.99) culminating in the exclusive release of a small number of albums pressed just for HMV which you won’t be able to find at your local independent record shop (or Tesco) and which HMV appear to have targeted at the Fathers Day market.

Here’s the full line up:

Whilst the John Martyn, Sex Pistols and Deep Purple releases look a little superfluous on the basis that they are hardly ever out of print and can be bought used quite cheaply, the Teenage Fanclub release will be good value compared to the £40-60 an original copy might set you back, whilst the Manic Street Preachers’ release is a chance to buy a limited version of the LP without splurging sixty notes on a box set or thirty on the original.

Slightly more sinister is HMV stealing a march by getting stock earlier than the competition on a selection of upcoming reissues, which you can buy weeks before they’re available anywhere else, including:

It’s amusing that a “black vinyl” release for the Iron Maiden has caché. Perhaps we have reached peak “coloured vinyl” when the black ones are celebrated…?

Good also to know Pulp’s “This Is Hardcore” is being re-released: original copies are regularly fetching a hundred pounds each as listeners re-evaluate the follow up to Different Class.

The indies still lead the way: take Rough Trade’s involvement in the Radiohead streaming event on the 17th June and its frequent instore events (Parquet Courts this week). My local record shop, Five’s Records, offer great service and had Wilko Johnson do a signing last year. South in Southend had The Mystery Jets play instore earlier this year. All offer a great experience not only on Record Store Day, but all through the year.

HMV may still be unable to match the best independent record stores for knowledge, service and enthusiasm, and I feel uneasy with the exclusive window of releases HMV has used their scale to secure to the detriment of independent stores, but nevertheless this HMV Vinyl week is a welcome addition to the record buyer’s calendar.

It feels more substantive and genuine than the opportunistic tactics of the Supermarkets and gives consumers an opportunity to buy something different, especially if they aren’t fortunate enough to live near an independent store.

You can see details of HMV’s releases via this link