The final day of Glastonbury brings a unique feeling of excitement, sadness, relief and exhaustion. Excitement at the prospect of new bands to discover and see. Sadness that it will soon all be over. Relief that soon you won’t have to tread through four inches of mud to head in any direction and that one day soon there actually might be somewhere to sit down.

Here are the top five moments from my Sunday at Glastonbury:

After announcing he and Jacqui Abbott are the “President and First Lady of pop”, Heaton then surveys the crowd, pleased with so many younger faces. “Our normal audience is normally like the queue in Antiques Roadshow…” he explains. 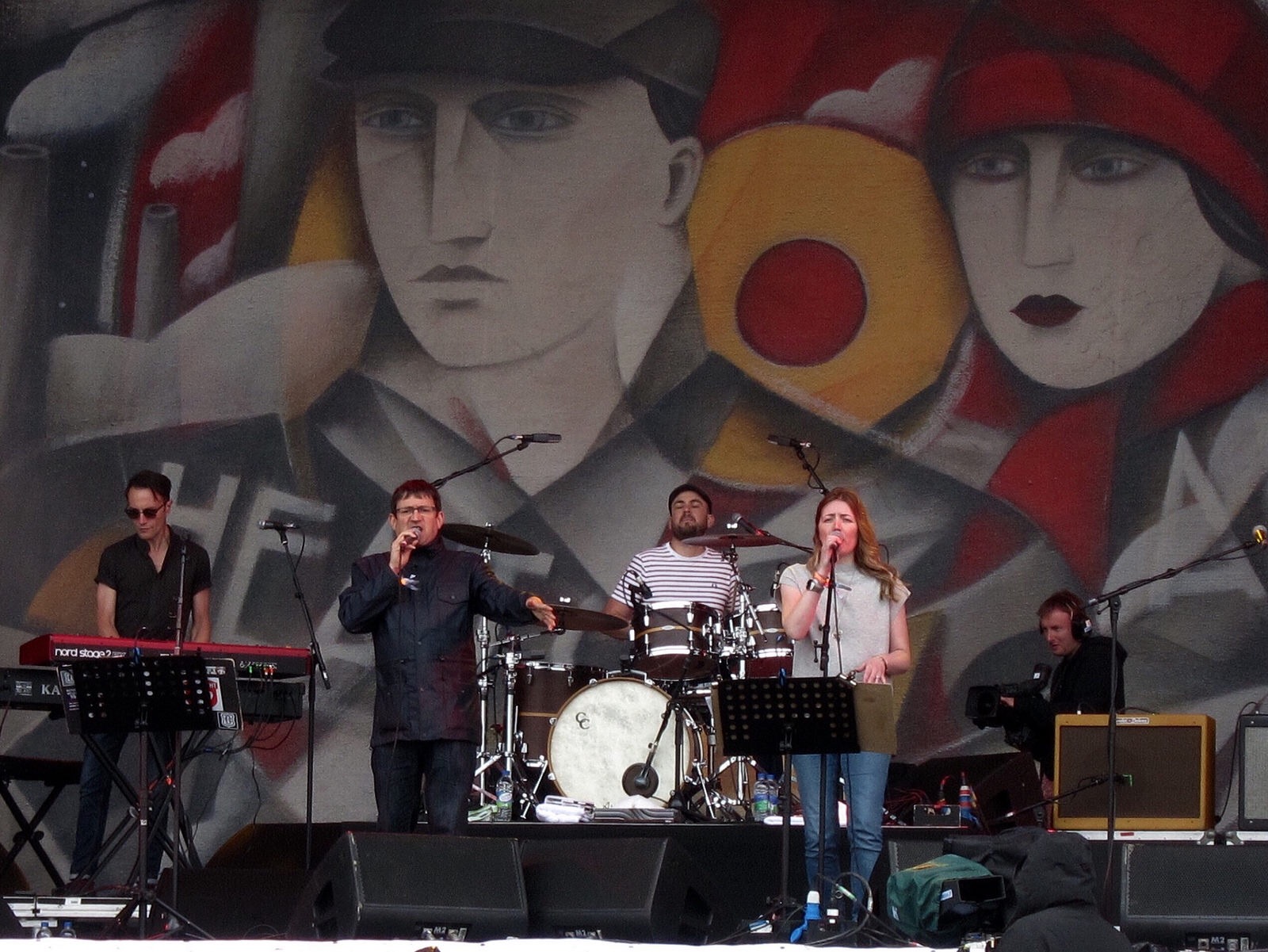 Heaton and Abbott’s set is excellent – a mix of strong newer songs blended with old favourites from their days as The Beautiful South whilst Heaton’s between-song banter is warm and good value.

2. A blistering set and a smashed tambourine from Nathaniel Rateliff and the Night Sweats at The Park Stage.

Nathaniel Rateliff is from Missouri and has a crack Stax-style band to go with his Stax-style vocals and occasional foray into James Brown-style dancing. It’s a blend of soul and country and is hugely appealing. Slower paced material like “Wasting Time” is reminiscent of The Band.

Last year’s debut album was, appropriately enough, released on Stax Records. During one song he dramatically hurls his tambourine to the floor whence it smashes to smithereens. 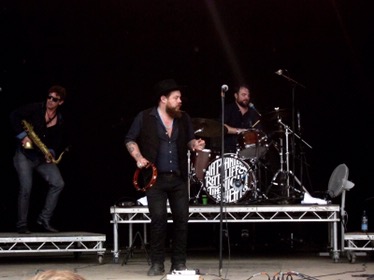 New song “I Did It” sounds like a promising follow up to the likes of “I Need Never Get Old” and “Howling at Nothing” from the debut album. Rateliff plays “the first song I ever wrote with this band”, “Trying So Hard Not To Know” and reflects how far he has come since then. It’s one of the best sets of the weekend, and the crowd are still singing S.O.B. long after the band has departed the stage.

Although note perfect, it’s raining persistently and Jeff Lynne is not the most communicative, so his ELO set lacks a little warmth in the way Dolly Parton and Lionel Ritchie both managed in their Sunday afternoon slots. Nevertheless, there’s no arguing with the likes of “Mr Blue Sky”, “Livin’ Thing” and “Don’t Bring Me Down”.

4. Beck delivers a masterclass to a curiously partisan crowd. Pays tribute to Prince and Bowie

One of the problems of the Sunday support slot is that some of the crowd are dead on their feet and those at the front get there for the headliner.

Beck’s brilliant performance (and it was breathtakingly good) was thus lost on a Coldplay crowd that appeared to be unable to conjure up even the words of Prince’s 1999 and Bowie’s China Girl.

Even the “uh huh huh oho / little China Girl” bit. Were they just unfamiliar with the songs? Really??

Beck senses the lack of energy. “I feel like we’re on a blind date or something…” he notes as he unveils great song after great song. “Devil’s Haircut”, “Loser”, “New Pollution”, “E-Pro”, “Sexx Laws”, “Girl”, “Black Tambourine”, “Think I’m In Love”, “Dreams” even a Sea Change era “Lost Cause” are all generously lavished upon the audience, and fall like seeds on concrete. 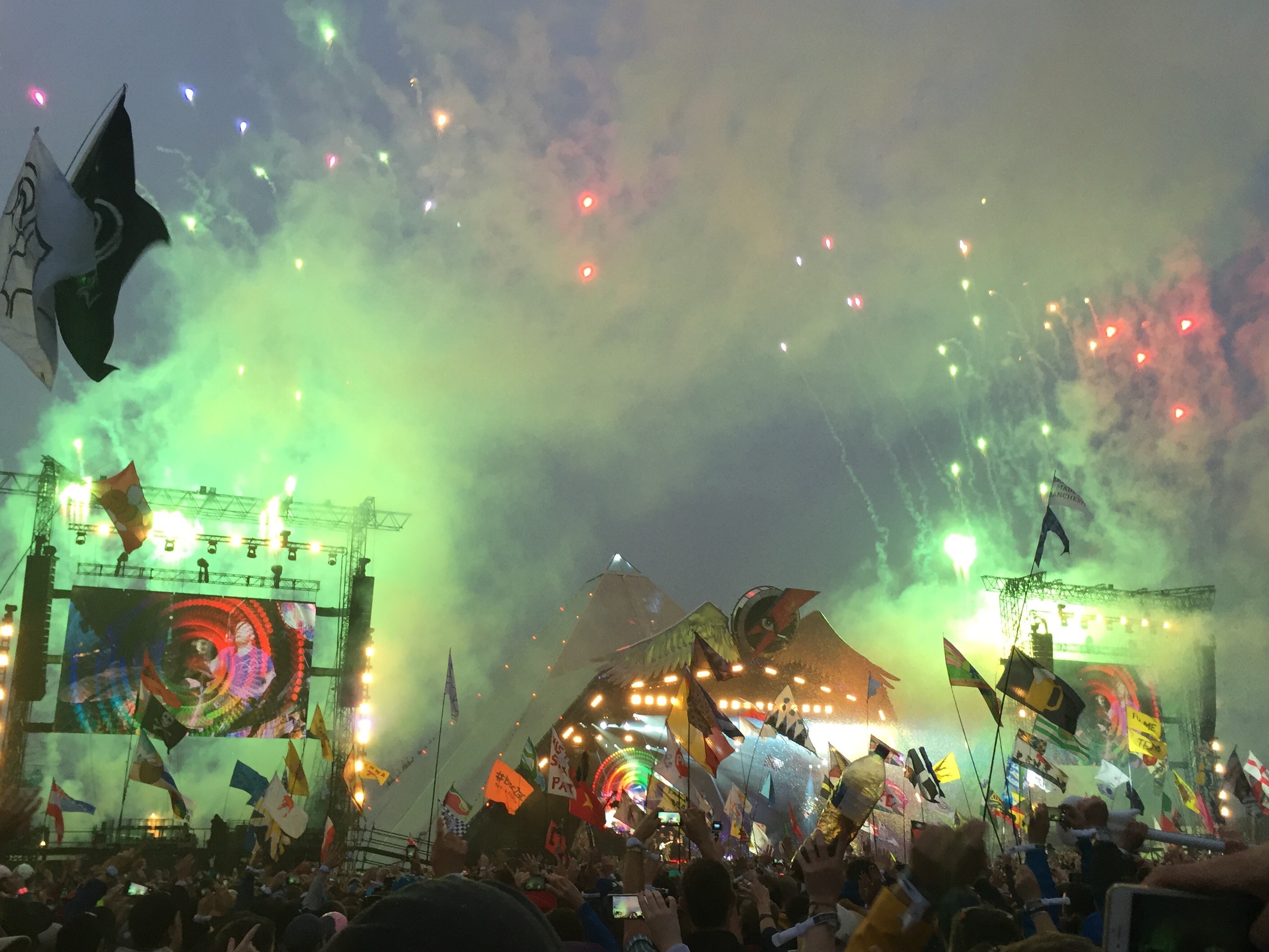 It was too far to trudge to see LCD Soundsystem (see first paragraph) so with white light-up wristbands on our arms we settled in for the finale.

We witness some lovely touches by Chris Martin amidst the fireworks, giant balloons and ticker tape of Coldplay’s Pyramid Stage headlining performance. They greet the crowd to the sound of Charlie Chaplin’s “Great Dictator” speech, still stirring after all these years.

Instead of a Bowie tribute, Coldplay pay tribute to Viola Beach – a band that had just been signed to a recording contract before they and their manager were involved in a fatal road accident. Martin and co play “Boys That Sing” to video footage of Viola Beach playing the song – a band cheated of their chance to progress their musical careers as Coldplay did to the pinnacle of headlining the Pyramid Stage.

Another band who never got to headline Glastonbury was The Bee Gees, so Chris Martin corrects this omission by inviting the remaining Bee Gee, Barry Gibb, to sing “To Love Somebody” and “Staying Alive”.

To end things off even Michael Eavis gets his moment in the spotlight, singing “My Way”. It feels quite final: like Eavis is fully passing on the baton to his daughter Emily before he retires into the beautiful Glastonbury sunset.