The xx: Live at Brixton Academy 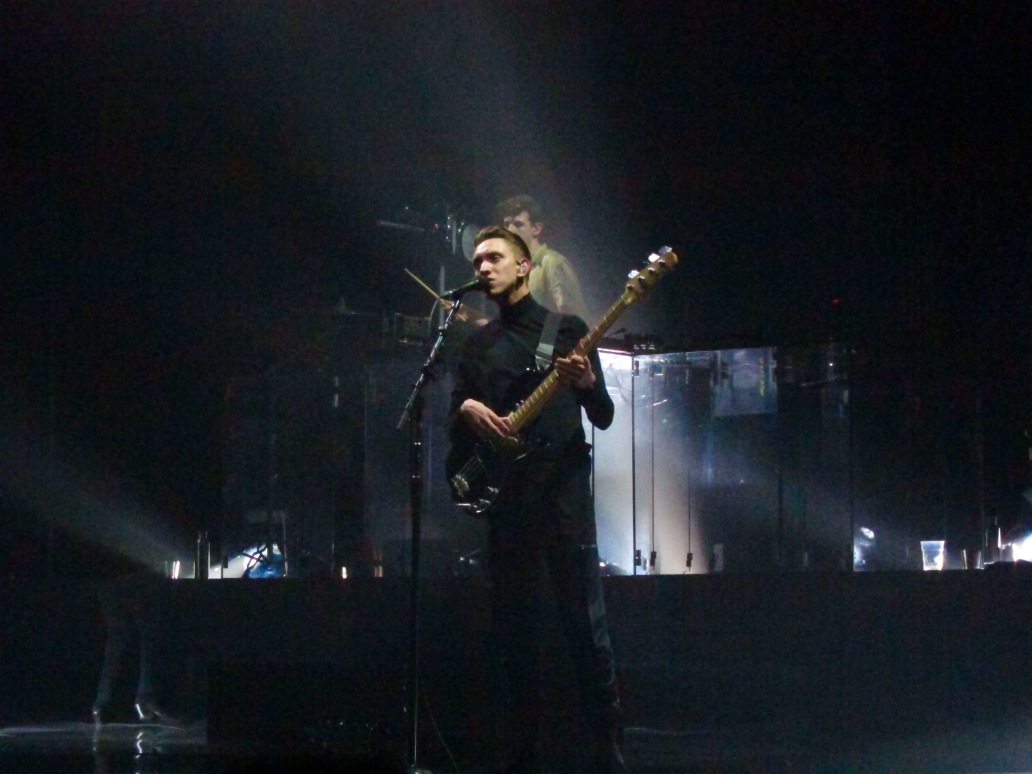 The xx have played a series of gigs at Brixton Academy this week which they have called “Night + Day”.

As South Londoners themselves this is something of a homecoming, and Brixton is abuzz with a celebration of The xx: aftershow parties, different warm up bands every night and so on, all organised by the band themselves.

Even local traders are getting in on the act, with Honest Burgers selling The xx Burger, with chorizo, guacamole and burger in a bun which is – what else? – dressed in black.

How did this happen to a bunch of shy kids like The xx? How did they get to sell out Brixton Academy for a whole week…?

Romy Madley Croft was reserved and arty as a child. She went to live with her aunt at eleven years of age after her mother died of a brain haemorrhage.

Internalising the feelings that eleven year olds have when a loved one dies, she began to make music, recording songs on to her computer in her bedroom.

When she was fourteen she told her close friend Oliver Sim that she had been making music.

It turned out he had been doing the same thing.

Although they were best of friends, they were both painfully shy, and until that point neither had told the other.

They shared their songs, but were too embarrassed to sing together, face to face. Instead, they sent them to each other over the internet.

What’s more, because they were making music in their bedrooms, and were both self conscious about it, when they sang they kept their voices down, singing in hushed tones, so as not to wake up the rest of the house.

Within a year Romy and Oliver had written new songs together in this way. Before long songs that appeared on their first album were written like that.

Neither were virtuoso musicians. Both were making DIY music. It was like punk, but instead of being angry and needing to shout at the world, they took a different approach, finding an alternative, internalised way to work through their feelings.

Unlike most teenagers who start bands, they didn’t play any gigs at school. “We didn’t want people to know” said Oliver Sim. Instead they travelled a little and played sparsely attended gigs with a friend, Baria Qureshi, and called themselves The xx.

They posted some songs on MySpace. An A&R man at XL Records heard the demos and went to see them play.

He saw some hugely uncomfortable looking kids onstage, nervously and self-consciously playing their songs to a drum beat recorded on a CD.

It wasn’t great, but it was different.

The A&R man set up some space for the group to rehearse.

Then came the missing piece in the jigsaw puzzle, Jamie Smith.

Smith had been to the same school as the others, and was into making drum patterns and beats. It didn’t hurt that he was also a little shy. It meant they all had something in common.

The forced circumstances of the shyness and lack of virtuosity of Romy and Oliver, combined with what turned out to be considerable talents for songwriting produced something new. A sound that was sparse, quiet and without flourishes. When Jamie came along to embellish that sound with his beats, there came the birth of something which, in 2010, won the Mercury Prize for best album. It turned out that intimate feelings of introspection and self doubt can be pretty universal in their appeal.

The xx (now without Qureshi) released their third album, I See You, earlier this year and you can hear the confidence running through it’s veins, thank goodness. It would be difficult to understand if they hadn’t grown up a little. Instead of that nervous shuffling and hushed apologetic singing, there is authority and confidence shining through in the vocals. And that’s great to hear.

What was interesting about The xx in 2009 was this sparseness of sound born out of their circumstances and, dare we say it, lack of self-confidence. But what is special about the 2017 version of The xx is to see how Croft and Sim have flourished and how their simple aesthetic has been embellished by Smith’s wider soundscapes.

On the Brixton Academy stage last night we witness self assured performers rather than awkward, mumbling teenagers.

Sim sways and prowls onstage, throwing circular shapes with his bass guitar. Croft is more reserved, but has the confidence to play new song “Performance” entirely unaccompanied, except by her own guitar. Smith scurries behind a rank of boxes, keys and drums. The band is surrounded by mirrors, including a ceiling with a few tricks of its own.

The set list draws from the debut album (“VCR”, “Crystallised”), follow up Coexist (“Angels” which is sung along to by the majority of the crowd, “Chained”) and most of the latest album I See You (but not, for some reason, the lovely “Replica”).

There’s time for an encore of “Intro”, an instrumental – the first song on the first album. For a moment Croft is a guitar hero, playing not power chords or flurries of notes, but apocalyptic (yet simple) surf guitar over an electronic beat. The song is transformed into something primeval.

By the end of a hit-packed set and the final song, latest hit “On Hold”, the warmth from the crowd is palpable. It’s quite a reaction – they roar approval. An appreciative Sim wipes a tear from his eye. Croft is speechless. As they walk off stage, Sim puts his arm around Croft’s shoulder, their having just played their sixth sold out night at Brixton Academy – a venue where they all saw their first live bands. And there’s still one more night (+ day) to come.

I don’t think they can quite believe it themselves.

Like Loading...
‹ He Wrote For Elvis And Performed The Greatest Ever Beatles Cover Version: The Story of Junior Parker
Secondary Ticketing’s Epic Fail: Why You Are Better Off Buying From Ticket Touts ›