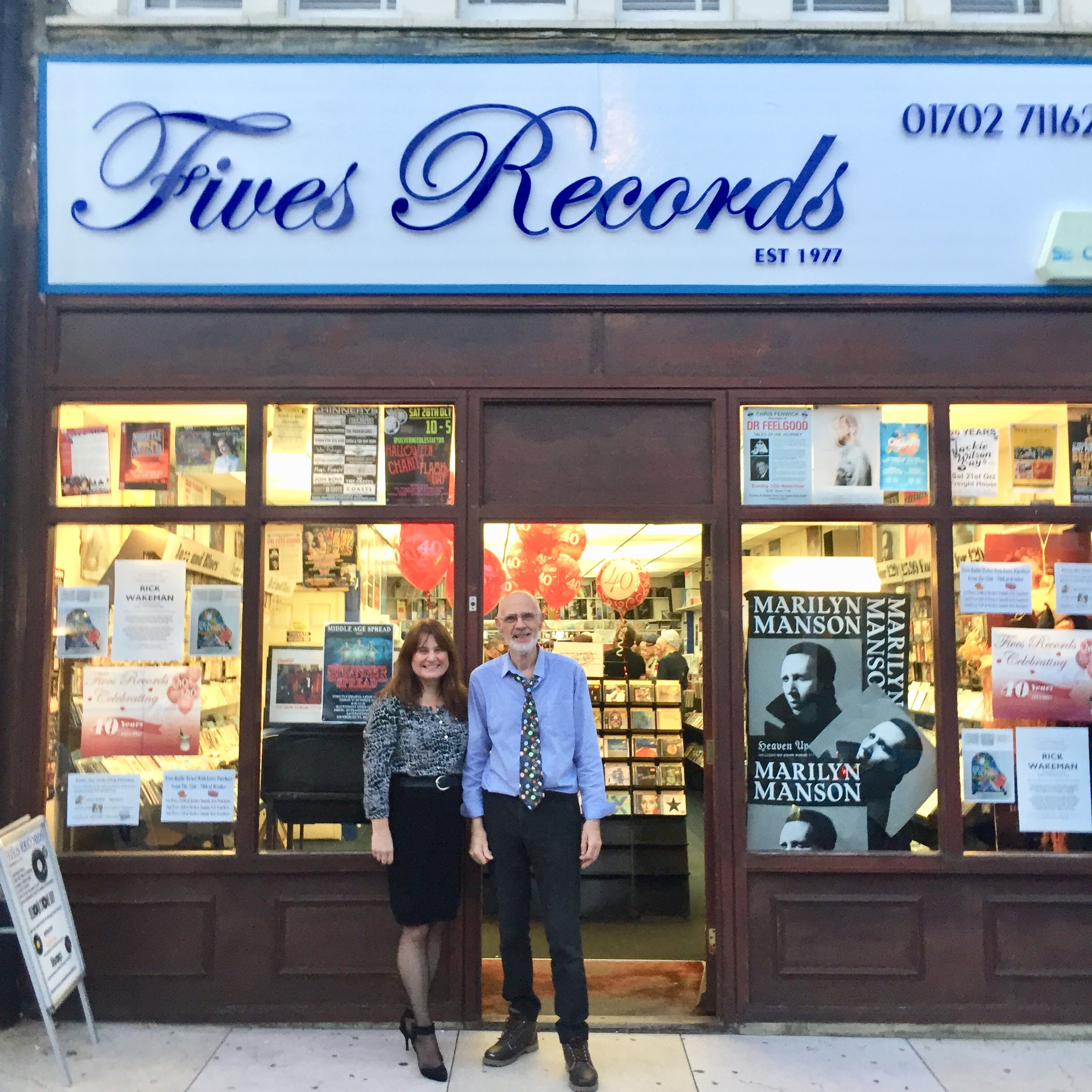 On the 28 October 1977 a thirty-seven year old Peter Driscoll opened a new record shop at 55 Elm Road in Leigh on Sea. It was the year of Punk and The Sex Pistols, so naturally the UK’s charts reflected this cataclysmic social upheaval, with the nation’s number one record that week being “Yes Sir, I Can Boogie” by Baccara. Pete’s friends suggested a catchy name for the shop, but he wasn’t one for fashionable but here-today-gone-tomorrow gimmicks. So he called the shop “Five’s”, reflecting the 55 Elm Road address. When he moved to premises on the Broadway, Leigh on Sea’s main shopping area eighteen months later, he kept the name.

In the intervening period Peter has survived three recessions, including the Global Financial Crisis, the multiple competitive threats of Supermarkets, online retailers, VAT loopholes, Napster, iPods, iTunes, Spotify and streaming, and perhaps most disastrous of all, the release of three Razorlight albums.

Not impressed? Well, to put that into context, consider in that period the number of independent record shops in the U.K. collapsed from over two thousand to just over two hundred.

Five’s wasn’t immune to the economy’s woes, with a second branch in nearby Rayleigh opening and closing in that period. And whilst Five’s itself moved a hundred yards or so up the Broadway in 2004 to its current premises, in 2017 it is very much a fixture of Leigh on Sea – a town amongst the UK’s happiest places to live if you believe what they say in the Daily Telegraph (and we do when it says nice things about our town).

Last night Five’s Records, run by Peter and his daughter Sandra, kicked off a Five-day (what else?) celebration of in-store DJs, musical performers and, the icing on the cake, an appearance – on Friday – of keyboard-botherer-and-erstwhile-sporter-of-capes-extraordinaire, the legend that is Rick Wakeman.

At last night’s launch was the chronicler of the sorry tale of Britain’s declining record shops, Graham Jones: a man whose decision to interview fifty customers of his to find out why they were still in business became a book, “Last Shop Standing” which later was made into a film, featuring Paul Weller and Richard Hawley.

Happily, Graham now reveals a more encouraging picture. In his job as a record distributor for acts such as Courtney Barnett and Nick Cave, he has seen Britain’s record shops increase in number by forty-one in the last twelve months alone, and by a hundred in the last ten years. This is partly driven by the removal of unfair VAT loopholes enjoyed by the online retailers such as Amazon, but also by the increase in popularity of vinyl as a format.

Graham regaled the throng with record store tales – the stories of customers who come in to a record shop and say “Have you got…” and then leave the likes of Peter and Sandra the unenviable task of trying to work out what record is being referred to. Apparently there is much bad singing in record shops by customers…and some very confused people:

“Have you got that record by the man who hurdled through the grapevine?”

These tales have been collected by Graham in his latest book, “Strange Requests and Comic Tales from Record Shops”.

In between these tales we heard music from an up and coming artist Ted Groves, joined by an even younger and very talented Polly McGill. All through the evening our host, local writer, DJ and former editor of Record Collector magazine Daryl Easlea introduced guests, played records and charged our glasses with Leigh Petrol, or is it is known elsewhere in the country, Prosecco.

Graham Jones has travelled up and down in a quest to visit every record shop in the U.K. and as he put it, Five’s “is one of the great record shops in the country”. And as Daryl Easlea added, not just because it is two doors away from the collectors item that is an actual Wimpy Bar.

In 2016 Leigh on Sea was voted “the happiest place to live” in the U.K. The survey measured various things, including good pubs, doubtless Wimpy Bars and Record Shops and strong community spirit. The latter was certainly in evidence amongst those present last night at Five’s.

I asked Sandra why she thought Five’s had survived these last forty years.

“I think we’ve always found out what customers want. Sometimes we have ordered things in advance for people and they are surprised when we have it, but it’s because we know them. And people are always asking us questions.”

So you must have to deal with a lot of bad singing?

You can get the full programme of Five Records’ celebrations, including Rick Wakeman‘ s in-store appearance from their Facebook page / by clicking this link.