The Origins of Elton John: From The Archives of Jackie Magazine

The Origins Of Elton John can be neatly catalogued into a series of events which, thankfully for archivists all over the world, were preserved in the annals of the specialist history magazine “Jackie” in the seventies, at a time when a teenage female historian was yet to discover the seeds of her crush on Elton were likely to fall on stony ground.

For those of us unable to immediately lay a hand on a complete run of Jackie comics, the entire strip is reprinted in one of the booklets included in 1975 LP Captain Fantastic and the Brown Dirt Cowboy, one of many reasons to buy that particular album on vinyl.

But before we delve into Elton’s vinyl, so to speak, let’s take a look at the comic strip, and see just how accurately it portrays the facts. Because it’s pretty good despite the disclaimer in red type here:

And see if you can spot how much spin they put on the ball here as a tremendously square-jawed Elton fields fictional questions about his love life: 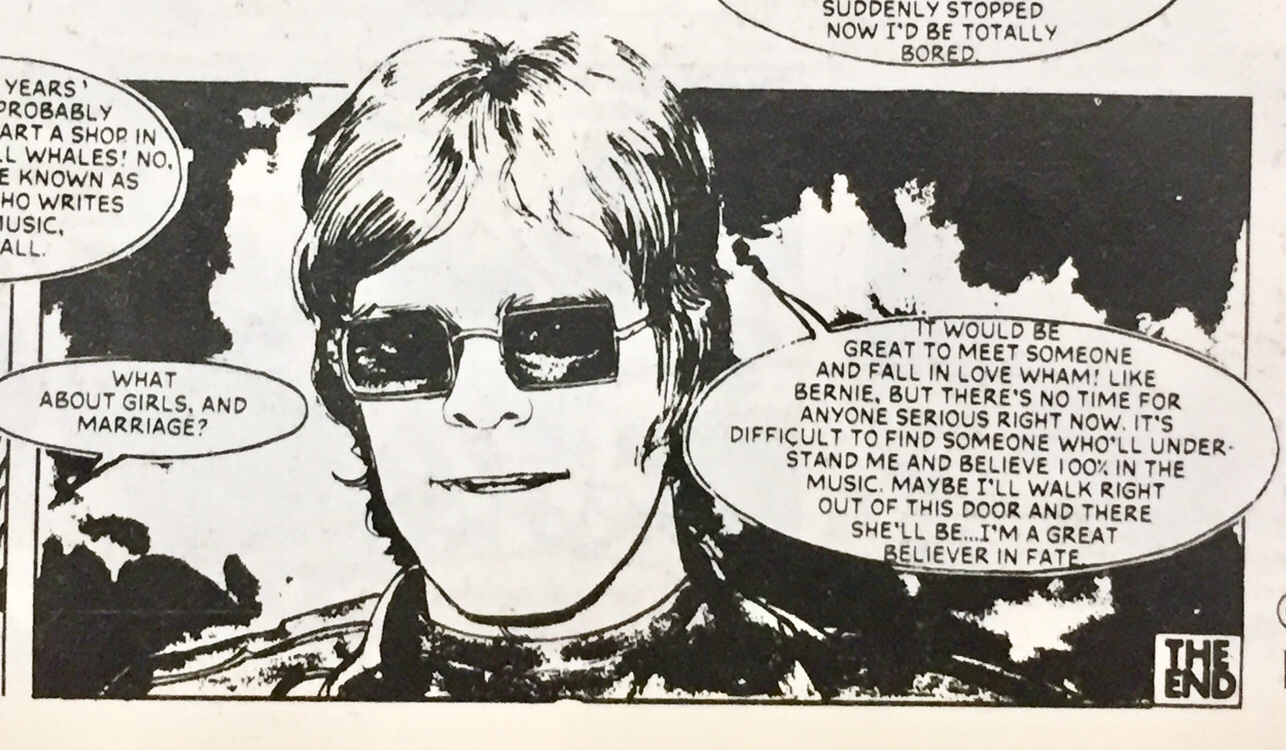 The joining together of one of the century’s most successful songwriting partnerships comes down, in the end, to one person.

That person is Bernie Taupin’s mum. If not for her fastidiousness in cleaning her front room, Elton and Bernie may never have met.

As with so many rock stories, it all began with an advert in the NME.

Reg Dwight, a piano-playing child prodigy, had joined Long John Baldry’s band, releasing a single and backing the likes of Doris Troy and Solomon Burke in the U.K. But, having seen Little Richard send a crowd wild with excitement through the judicious kicking of his piano stool, Elton aspired to be a star. It says much about how boring Britain was back then that standing up at the piano and kicking back your piano stool drew an apoplectic response from onlookers.

It’s not the same now. It’s okay when Little Richard does it, but apparently kicking back your chair at work is now “unacceptable behaviour” and will earn you strange looks and a visit from HR.

It did me, anyway.

What can you do? In the eighties, audiences would walk out unless the headliner was knee deep in dry ice, lasers and mechanical dragons.

Jackie had a guess at what it looked like (above), but it actually looked exactly as printed on the cover of the booklet in Captain Fantastic…

The nineteen year old Reg went to Liberty’s offices to audition. But with little room to kick back his piano stool, he didn’t impress.

Meanwhile, 17-year old Bernie Taupin, a Lincolnshire-based villager and budding poet, had seen the same NME advert. He had written a letter, complete with samples of his lyrics, but then lost it.

At this point the odds on a Taupin/Dwight union appeared as remote as the prospect of a contestant on Love Island having something intelligent to say about Brexit. One had lost his letter, the other failed the audition. And yet, we know how the story ends. So what was that about Bernie’s mum?

This sainted lady found Bernie’s letter two weeks later hidden behind a clock. She posted it for him.

Reg was called back to Liberty’s offices a few weeks later and told of his failed audition by the author of the NME advert, Ray Williams. As Williams relayed the bad news – and perhaps realising the limitations of the office when it came to kicking piano stools – he gave Reg a lifeline. Would Reg possibly be interested in seeing some lyrics Williams had just received from a bloke in Lincolnshire?

As 1968 got underway, Reg and Bernie had put together some songs they hoped to sell to publishers for other people to record. But Reg’s demo vocals were so good, he was offered a record deal in his own right. One problem remained.

Reg felt his name lacked, as the French would say, a certain I don’t know what. According to Jackie’s story he specifically thought it was a name a window cleaner would have.

(Incidentally, the exact same issue would affect a certain Rita Crudgington a decade later before she changed her name to Cheryl Baker and joined Bucks Fizz. Cheryl/Rita wins the “least glamorous real name of a pop star” competition every time, with Reg/Elton a close second).

At the time, Reg was playing with Long John Baldry, and in the band was a saxophone player called Elton Dean.

Reg wondered if he could simply have Elton Dean’s name? Understandably Mr Dean wasn’t entirely comfortable with the request, so Reg took the “John” from his band leader’s name and the name Elton John was born, much to the disgust of Rowan Atkinson in this brilliant sketch:

Elton’s name, apparently, was also a source of similar fun for Groucho Marx who would tease Elton about it whenever they met.

But what about the vinyl?

Over the course of the last couple of months I have been on the lookout for original vinyl pressings of Elton’s early albums. It hasn’t been the trickiest task, as record fairs and used record shops are rammed to the back teeth with them. You can’t move for Elton John’s albums in these places. The reason is that Elton sold in the millions during the seventies and early eighties, and right now he is a little under-appreciated, so there’s lots of ‘em around.

If there is a criticism of vinyl (and there are people, as shocking as it sounds, who aren’t entirely taken in by the marketing) it is, as the New Yorker cartoon famously put it, the expense and inconvenience. 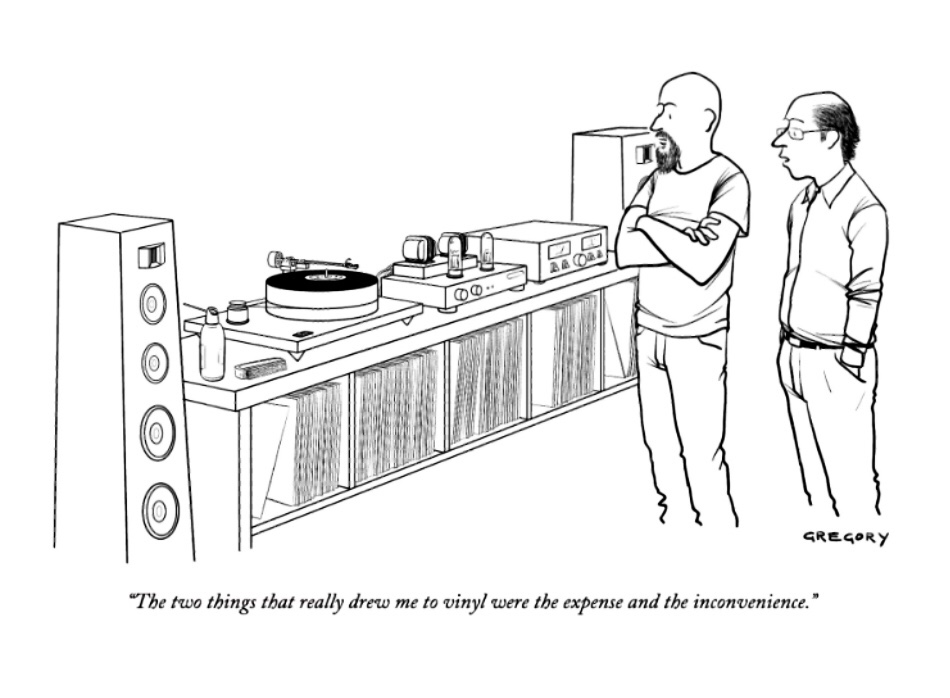 If we were to add a sub-category to the inconvenience bucket, it’s the storage aspect. You may be aware that aside from infidelity and money issues, the biggest cause of marital disgruntlement in Britain (and has been since Sat Navs eliminated “map reading on journeys in the car” as a cause) is the storage of records. So although Elton’s albums are plentiful and, best of all, dirt cheap, there may be only room in your collection for a few select items.

To put this into context, if you live in the the London borough of Kensington and Chelsea, as I like to imagine most of my readers do, and you rent at the average of £41 per square foot, it costs 75p per year to store a single LP assuming you can fit 55 LPs in a square foot of space. Owning and storing ten Elton John albums in your flat therefore costs you £7.50 a year, which is more than it would cost you to buy a decent copy of Honky Chateau. Store more than 165 records and, frankly, you are better off having a Spotify account and moving somewhere 3 square feet smaller.

Therefore, let’s keep costs to a minimum, and find the four or five Elton LPs that will give you the most joy.

We’ll look at the first of those next time, while we discover how Elton and Bernie got signed after being discovered lurking above a bank at midnight, and we will also find out where to find Elton singing very average cover versions of “Bridge Over Troubled Water” and “Spirit in the Sky”…

9 responses to “The Origins of Elton John: From The Archives of Jackie Magazine”