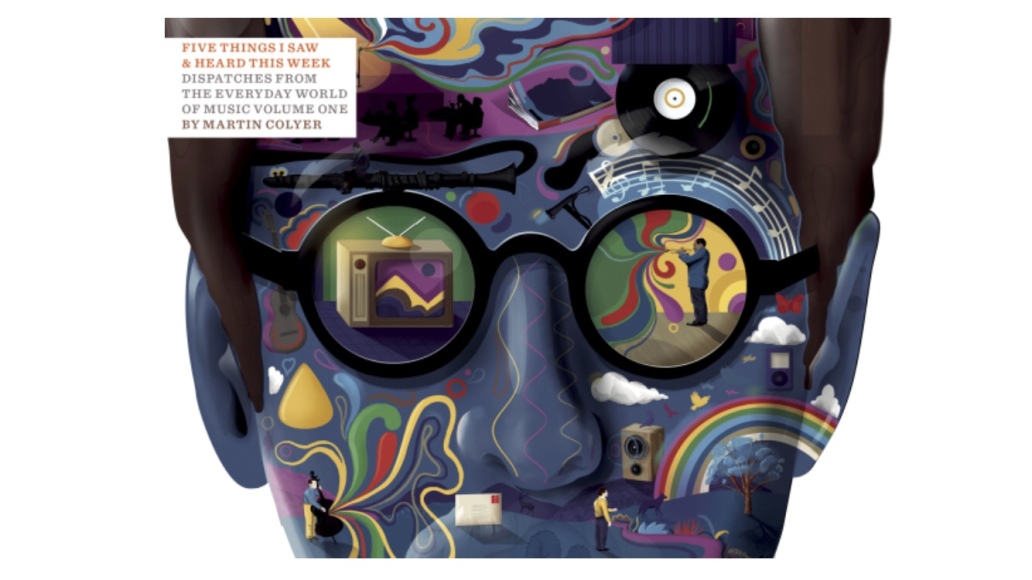 For the kids who Snapchat photos of themselves with a dog’s nose and ears superimposed, or who Instagram their every (doubtless avocado-based) meal, blogging about music may feel about as unfashionable as, well, Facebook. *

Although very much the best way to keep on top of new music ten or fifteen years ago with all those pre-release mp3s, music blogs have found themselves overtaken by the rise of social media in the last decade as the best way to keep up to date with musical trends and tastes. A single tweet can do the same job as a blog post, and far more quickly. Streaming means we don’t need to download all those music files to our iPods any more. And we don’t have iPods any more than we have Nokia phones with a flip case.

So music blogs have had to evolve, specialising in a particular field, or, in the case of Every Record Tells A Story, meandering purposelessly making whimsical observations about everything and nothing.

Back in 2012, the same year as ERTAS began, another new music blog started up. It truffled around the quirkier aspects of musical life and like many good music blogs, had a set format: The Five Things it’s writer, Martin Colyer, Saw and Heard that Week.

Colyer has an inquisitive mind and an eye for little details. As he explains in the introduction to his new compilation, he began when he wanted to talk about Bruno Mars’ bass player after seeing him at the Brit Awards. Having witnessed the way this unsung band member evoked the great Motown bassist James Jamerson, never putting a note or footstep wrong, Colyer realised this amazing performance might otherwise go un-noted and he resolved to find a way to record such great moments.

or when On The Beat Records in Fitzrovia sadly closed its doors and put itself up for sale on eBay. As Colyer points out, the owner will post, but only to the U.K…

…or an advertisement for “Janis Joplin shoes”, which you can only imagine would have Janis herself spinning in her grave…

Add to this musings on the cost of insurance of an M.I.A. Video and Alison Moyet breathing a sigh of relief on Twitter that her youngest is taking GCSEs because this means she won’t have to listen to another school choir version of R Kelly’s “I Believe I Can Fly” and you start to see how Colyer’s mind works and you realise the blog is as eclectic and full of unforeseen surprises as the middle aisle of wonder in Aldi.

It’s a fine idea for a blog, and so I’m going to ask you to do two things. First, follow Martin Colyer’s blog (you can find it by clicking through to it here). It’s tremendously entertaining. As the foreword explains, “You might not share every one of (his) obsessions, but (he’s) never going to waste your time”.

Secondly, take a look at the book – available on Amazon – it’s beautifully produced in full colour with loads of photos and will take you in a hundred different musical directions (there’s also a Spotify playlist of the book that you can track down on the blog).

The inbox for ERTAS is typically (and sadly) a PR writer’s graveyard but I opened this press release and was tickled by the writer’s good humour when pretending to quote Toto lead singer Joseph Williams.

2. Don’t Bore Us, Get To The Corvus: From the ashes of The Black Crowes comes The Magpie Salute: consisting of ex-Black Crowes members guitarist/songwriter Rich Robinson whose alternate tunings have always made his playing stand out from the crowd, and Southern Harmony-era lead guitarist Marc Ford. This murder of American Crowes are joined by a Brit, John Hogg, on vocals. The stripped down three piece (the full band sports ten members) played an acoustic set at Rough Trade East at an in store signing of their debut album High Water I. 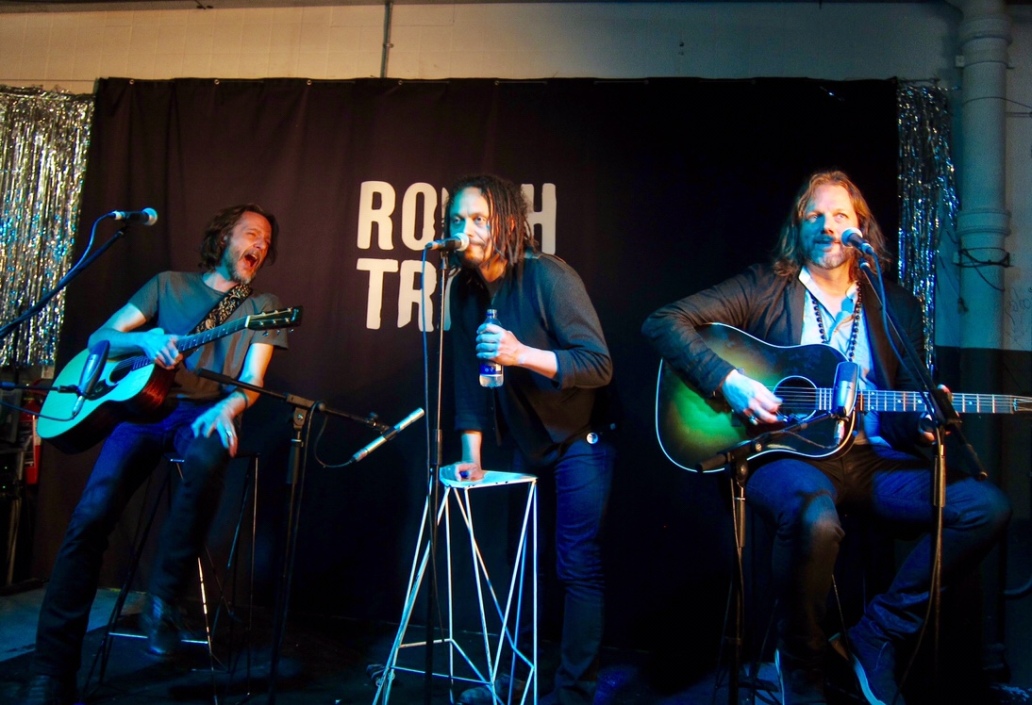 Songs such as “For The Wind” evoke the best of The Black Crowes and in the likes of “Sister Moon” and the title track, which sees Robinson explore Nick Drake stylings, take the music in fresh, mellower directions.

3. Proving even a stopped clock is right twice a day, the otherwise lamentable Mail on Sunday has declared their Album of the Week to be Wapentak by Sweet Billy Pilgrim. 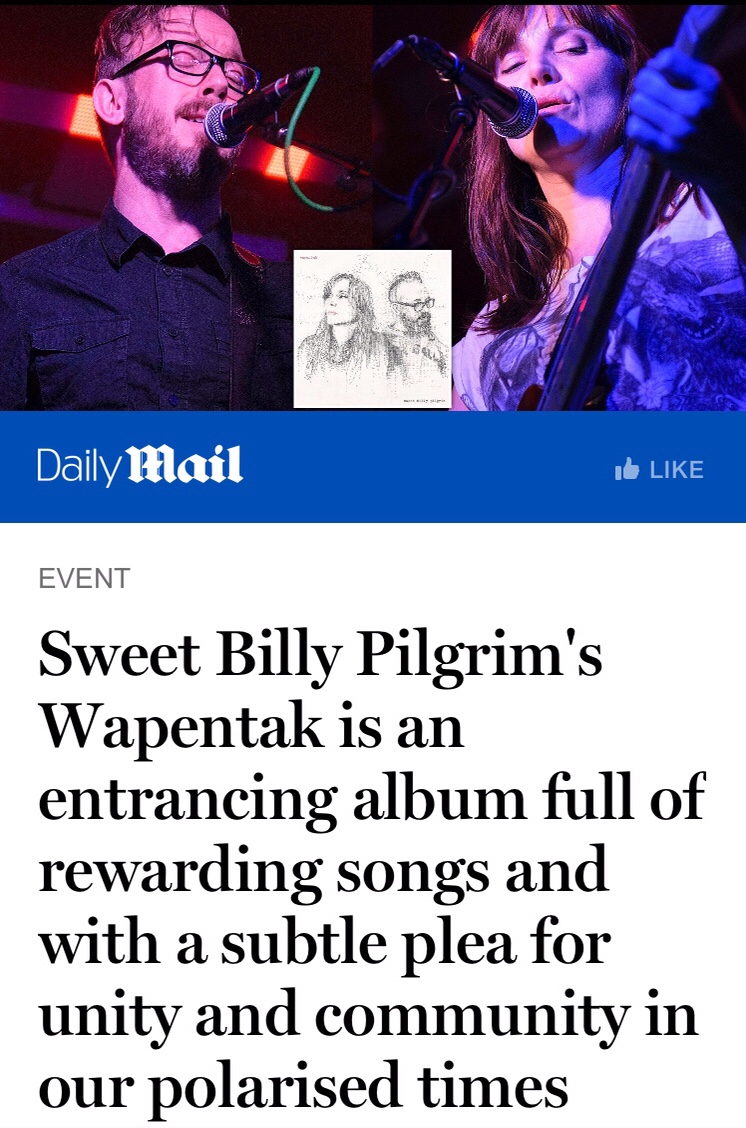 An unlikely source of praise, given the album’s message is one of conciliation and togetherness, and unusually accurate from a source that even Wikipedia has declared too unreliable. Much deserved, the album was released this week.

4. Smash Hits remembered in The Guardian featuring interviews with David Hepworth and Sylvia Patterson. Patterson’s 2017 memoir “I’m Not With The Band” was a joy to read, evoking those heady, irreverent days of the Hits.

“We’d do things to make each other laugh… We called the A-ha singer Morten “Snorten Forten Horten” Harket because that’s how we thought Norwegian people talked. “Chris de Bleeurgh” droned on about his “dear friend Princess Diana” and was so pompous and dreary that we reduced the typeface on the page until it was tiny and unintelligible and eventually just disappeared.”

5. From the comments section** of a Guardian article on how CDs may yet have a revival despite currently being “Hipster Kryptonite” comes this Tumbler blog highlighting snake oil in the hi-fi world. Wathifi has some fantastic examples of pseudo-science including this wonderful description of an incredible new piece of hi-fi kit:

“Some nice things happened in the upper octaves. Everything, even overbright recordings, had a top end that was more liquid and silky – not like classic tube sound, where the highs are actually colored to sound more sweet than real life, but the upper octaves were relieved of a little bit of dryness.”

What is this piece of wonder-kit? A DAC? A tube amp? Some new technologically superior circuitry?

A chunk of acrylic which you balance your Mac Mini on. Yours for a mere $349.

You can order Five Things I Saw & Heard This Week, Volume 1: Dispatches from the everyday world of music here

* As an aside, quite why there is a trend for doctoring photos of yourself to look daft is unclear. Thirty years ago, if you didn’t like a photo of someone in a newspaper, the standard approach would be to draw a Hitler-style moustache above the top lip, and withdraw, giggling at your random act of unkindness. Now people – apparently voluntarily – make photos of themselves looking ridiculous publicly available for all to see. It’s a funny old world…

** I always read the comments section of CD v vinyl articles. It’s amazing to see so many different opinions in one place, with each one convinced only they are right.