Jon Savage Dreams of The Seventies in New Compilation 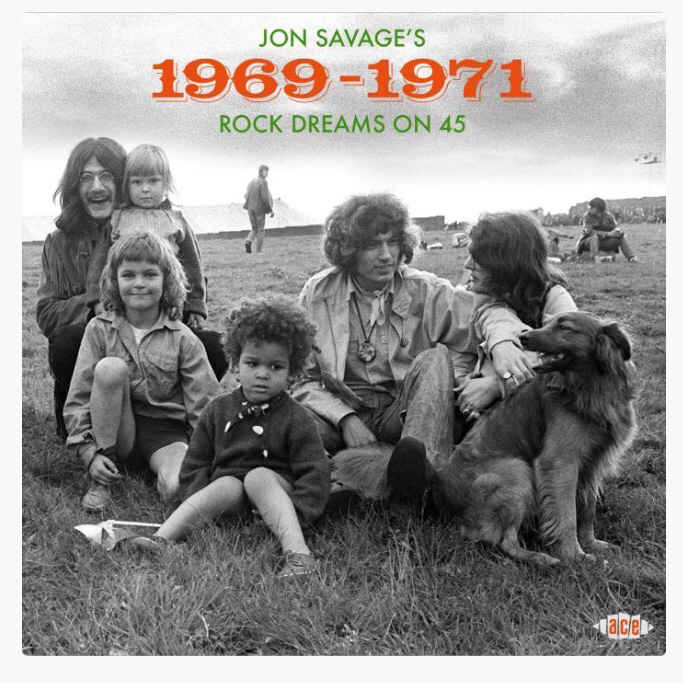 Ah, the swinging sixties. If you can remember them, you weren’t there.

If you can’t remember them, you may not have been born yet, and thus weren’t there either. So no-one was there. And yet, there they are, the swinging Sixties, where everyone who now has a final salary pension scheme had more fun than we did when we were young, if they could only remember it. Which they can’t.

To make all us youngsters feel better, the reality of living in the sixties may not have been quite as good as the advertising. Most sixties children still had to live through the sheer grimness of the seventies, and you wouldn’t wish that on many people, worst enemies and politicians aside.

Ah, the swinging sixties. The food was tinned, there wasn’t a crushed avocado in sight outside of Mexico and music was rubbish.

At least at first…

As any record collector will know, if you find a pile of 7” records from that era in a shop, the ratio of dirge to anything remotely listenable is higher than your blood sugar level after eating ten Krispy Kreme donuts.

This is the decade when Engelbert Humperdinck’s “Please Release Me” beat The Beatles’ greatest ever double A side of “Penny Lane/Strawberry Fields Forever” to the number one spot. Not since the Eastbourne Riots of 1998 kicked off after a seaside cafe put up the price of their afternoon tea and cake special by 10p have grannies been such a menace as they were in the sixties.

Further evidence? The third highest selling single in the U.K. of the entire decade was…..?

The Seekers, Cliff Richard, Rolf Harris (shudder) and Jim Reeves all feature in the top fifty selling singles of the sixties. Acker Bilk had the top selling single of 1961, and Frank Ifield the top seller of 1962. They’re great if you like the clarinet or yodelling.

Of course, The Beatles and The Stones solved all that, and between them scored 23 of the best selling fifty records of the decade, despite not being at the races for the first three years. Which concentration of quality suggests the charts remained full of granny-pleasing middle of the road pap – and I don’t mean Maxwell’s Silver Hammer. But still, all those 7” records by Jim Reeves, Jimmy Jones and The Allisons lurk like toxic waste in charity shops, immovable and unmoving, ready to outlive cockroaches come the nuclear apocalypse, or worse still, to be picked up during one of your more generous whims, and erroneously listened to in case it’s an unearthed gem rather than something that will give you toothache.

And don’t take my word for it, these catchy phrases also happen to be the titles of a series of seriously excellent compilation albums by author Jon Savage.

Not content with writing a book about 1966, Savage dug out some of the decade’s best songs and lovingly placed them all onto a series of brilliant compilation CDs. Among a few familiar tunes (you don’t want it to be like going to school after all) nestle obscurities, radio-only hits and long-forgotten gems. The music of the sixties, shorn of it’s Ken-Dodd-tolerating excesses becomes exhilarating.

As well as being a great listen, it sharpens the skills of the record collectors among us: when Norma Tanega’s “Walkin’ My Cat Named Dog” hoves into view in the 50p singles box, we now know not to dismissively flip it by.

Savage has done the hard work. He has lived through that decade when pop music was only on the radio an hour a week, listening to dross day in and day out. Was it romantic tuning in to pirate radio stations to hear the latest tunes through your crackly transistor radio on a fickle medium wave, or was it just an unutterable, frustrating bore? No wonder there was little demand for breakfast avo – no one had time to lovingly prepare a morning meal, they were all apparently exhausted from staying up late, twiddling their knobs, desperately seeking something listenable on the radio.

Savage’s latest compilation CD on Ace Records, the catchily titled “Jon Savage’s 1969-1971: Rock Dreams On 45” contains further nuggets, as pop goes rock and the decade draws to a close. The seventies take over. Things get tribal. It’s another impeccably chosen 43 songs, all drawn from Savage’s childhood memories. Where else could you hear a brilliant Elton John cover by a band called Toe Fat? In one song Toe Fat achieve what twenty artists failed to do on Elton’s Two Rooms covers compilation – produce a listenable cover of one of his songs. I guess one thing you can say about songs from the sixties and seventies is at least they didn’t have The Eighties’ production techniques.

Listening to a Jon Savage compilation is as close as you can get to being in the era. It’s like you are tuning into a pirate radio station, without the crackles and annoying DJs. New discoveries lurk around every corner. You could say that by pulling out these lesser known gems Savage has earned that final salary pension (although I dare say he doesn’t have one). Together, the series of CDs – moving from ’60s pop to ’70s rock – form a fascinating picture of the times, one where the music is vibrant, exciting and experimental, always moving forward. By straying from the middle of the road, Savage takes a more interesting path, and it’s exciting to join him on his journey.

Jon Savage’s 1969-1971: Rock Dreams On 45 is our now on Ace Records, along with the other compilation CDs mentioned, and a double LP version combining highlights of 1965-68.

Like Loading...
‹ New Music, New Battles
New Evidence Reveals The Place Where John First Met Paul Is Not Where You Think It Is… ›