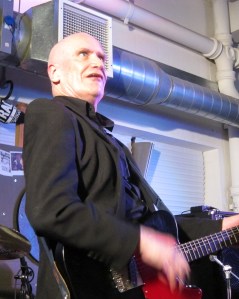 Wilko spoke eloquently about his life in front of a packed crowd and was then joined by his band, featuring former Blockhead bassist Norman Watt-Roy and drummer Dylan Howe. The band played a fantastic and energetic half hour set including Feelgood favourites All Through The City and She Does It Right. Wilko has lost none of his trademark crazy-eye-stare charm…or his way with words. 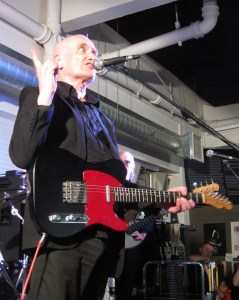 The book itself is a gorgeous and colourful rock n roll scrapbook of  Wilko’s life – a unique account of Planet Wilko. Inside its pages is a social history of growing up in Canvey Island, travels around the East as a hippy and the days of Dr Feelgood and Ian Dury and The Blockheads.

Buying this book” said Wilko “speaks volumes for your discrimination as a reader and your taste as a decorator”….“Zoe really wrote the book – is she the Ghost Writer or am I the Ghost object? Whatever – the book is definitely haunted….”

Wilko spoke of his Canvey childhood: “I was born in Canvey Island. Below sea level. The first thing I can remember was that in 1953 there was a disastrous flood where 50 people got killed – the sea wall broke down one freezing night and everybody was evacuated from Canvey Island and we went up to stay with relatives in Sheffield while they were drying Canvey Island out.”

“As a teenager – one day at school I saw an electric guitar and was absolutely fascinated by it. We formed a “jug band” and used to play down the sea front on Canvey Island, busking. One day we were doing that and these three boys came up and were very interested in what we were doing. One of them in particular was asking all sorts of questions – and this was (Feelgood singer) Lee Brilleaux. One of the songs we learned was called Dr Feelgood. Sparky (John Sparks, Feelgood bass player) suggested the name Dr Feelgood: I said it’s been used before – but nobody on Canvey Island’s gonna know, (so) we became Dr Feelgood.”

Wilko then explained how The MC5 became a huge inspiration.

“We got this gig playing Wembley Stadium in 1972 – Little Richard, Jerry Lee Lewis, Chuck Berry. – it was a fantastic show. The morning was filled up with “banger” English bands like Screaming Lord Such and us. I find myself standing up there in Wembley Stadium doing this show. After, I go walking out and I saw this band. I could see they were Americans and I quickly realised it was the MC5. Wayne Kramer dressed all in black with a golden face like Tutankhamen and the rhythm guitarist was all in silver – it was a revelation. Now the Teddy Boys didn’t like it – they want Twenty Flight Rock and nothing else, you see MC5 doing Rambling Rose and they were throwing cans at them and everything. Wayne Kramer – this can came flying out of the air and he kicked it and he kicked it again and he didn’t break his stride and I thought – this is the man – they’re brilliant!

Afterwards I saw Wayne Kramer and he was dejected because they’d had a bad time out there and I said “It was fantastic – I thought you were really great” and he said to me he thought if they had had another twenty minutes he would have won the audience over. I said No – you couldn’t – they’re Teddy Boys – and I started telling him all about Teddy Boys – a bad scene. Anyway, you can get a DVD of the story of the MC5. There’s a bit where they talk about coming to England and they play at Wembley Stadium. And Kramer says “Yeah man, there’s these things called Teddy Boys…and he did my exact speech – and I thought “I told you that man!” I came away from that gig and decided to go for it.” 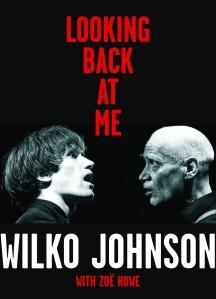 There has been a resurgence of interest in Dr Feelgood since the Oil City Confidential documentary which told the story of how a band from Essex updated the sounds of early Stones RnB and pioneered an underground movement of their own based upon their incendiary live performances. They became the fore-runners of punk in the UK, only to split up just as they were on the edge of their big break in the USA.

The book, Looking Back At Me, is a worthy, interesting and beautiful addition to the documentary and is out now.

Record #51: Dr Feelgood – All Through The City

Like Loading...
‹ Girls: Live at The HMV Forum, Kentish Town
Guns n Roses at Donington ’88 – The Triumph and The Tragedy ›