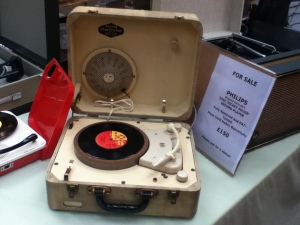 For sale at Spitalfields – the latest iPhones

Part 5: Buying The Beatles on Vinyl at Old Spitalfields Market

The story so far: A bet has been struck. It is the 19th October 2012. I have until tomorrow to buy a complete set of Beatles records on vinyl for less money than the 2012 Re-issued Box Set. The clock is ticking and the stakes are high…the loser has to listen to a Mariah Carey album. Ten times. Following a successful trip to Leigh Record Fair and Leigh Records I have nine out of 14 LPs. All my hopes rest on Spitalfields Record Fair.

The record fair at Spitalfields market in London is a twice monthly event which attracts  record collectors from miles around on the first and third Friday of each month.

With over forty different stall-holders it is an Aladdin’s cave of  rare and valuable vinyl.

As I sped around the fair seeking out the remaining five LPs I asked a few record traders if they thought that the 2012 re-released Beatles albums would affect the market for second-hand Beatles records. They thought not. “They’re always re-releasing the Beatles on vinyl!” was the first thing they all said. One continued, “It’s a collectors mentality – it’s the same music but people always want the first pressing. As long as that continues, I don’t think these new releases will affect prices for the originals”.

Within a few minutes I found a nice copy of Beatles For Sale which was just £6. That made ten Beatles LPs  for £135.

The nice thing about the record fair (as was the case in Leigh) was that I also found a couple of other bargains whilst looking around. A stall selling books had Neil Young‘s biography Shaky for just £2 (sadly not the story of the Welsh Elvis: Shakin’ Stevens) and Diary of a Rock n Roll Star by Ian Hunter for £5 – a classic paperback for a good price in great condition. I also found Our Band Could Be Your Life – the classic alternative rock bio for just £1.

Our Band Could Be Your Life

But more importantly, there was also a glut of Beatles Vinyl. Oh yes! Looking around the stalls I found:

Bob at Leigh Records had a couple of these in better condition, so I could pop back to him, but I had everything sewn up: except for Past Masters. Suspecting I had missed it, I began asking around, but no-one seemed to have a copy. This was beginning to be a serious problem – tomorrow was deadline day.

Finally a stall-holder finally said he did have one!  I breathed a sigh of relief – victory was within my grasp!

Until he said “But not here I’m afraid. I can bring it along next time though. In two weeks”.

I screamed inwardly and smiled weakly, with the air of a condemned man about to have to listen to a Mariah Carey LP.

“Out of interest, how much would it cost?” I asked, torturing myself. The stall-holder twisted the knife.

I would have been on budget…

That was it then. I had failed The Beatles Stereo Box Set Challenge. Let’s just say that again. I Had Failed.

With Chris coming round the following evening, I made a call, through slightly gritted teeth. So near and yet so far.

“Chris – you’ve won. But only just. You can buy a complete set of Beatles records for under £300 – no problem. I have all but one record and have spent £200. But the last one – Past Masters – is hard to get hold of, and even though it’s only £30, I haven’t got it. You can go out and buy your Mariah Carey CD to torture me with”.

“Or perhaps just take it out of your CD collection” I added bitterly.

Chris whooped with glee. I suspect he punched the air in triumph. And no little relief.