My-My / My-My – one of Sukita’s unpublished photos from the “Heroes” session on display at Snap Gallery, Piccadilly Arcade

Working in London. The Rat Race. Typified by long hours, the travelling on packed tube trains full of fully-caffeinated and slightly wired Londoners who possess the patience of a two year old Mariah Carey in a sweet shop, the smog (let’s keep that one in for any foreigners who still think London has smog, despite the fact that it hasn’t been seen for sixty years) and general rat race – which in some parts of London might be taken literally. However, there are times when working in London has its advantages.

There’s that low-key “David Bowie Is” exhibition at the V&A that hardly anyone has spoken about. On Friday 22nd March, Inspiral Carpets played a free lunchtime gig in Covent Garden. And on the same day, Snap Galleries launched their own David Bowie exhibition featuring Japanese master photographer Masayoshi Sukita.

This is Sukita-san’s first UK exhibition and follows the success of his sold-out book “Speed of Life” published by Genesis Publications. The book was a work of beauty and featured photographic sessions between Sukita and David Bowie which spanned both their careers, from 1972 – 2002. This new exhibition features some previously unpublished images, alongside familiar classics and is well worth a visit, especially if you are in town for the V&A exhibit.

Sukita, with a background in fashion photography, had seldom photographed musicians when he first saw David Bowie live in concert at London’s Royal Festival Hall in 1972. Within a week however, Sukita had booked a session with Bowie and so began a 40+ year working relationship. Sukita was there to welcome Bowie to Japan in 1973, and in 1977 shot what became Sukita’s best known work – the cover of “Heroes”, and of course, David Bowie’s new album “The Next Day”.

Situated on two floors, the exhibition shows how Bowie has visually evolved over time. We see how in 1972 “He’d blow our minds” with an action pose as Ziggy.

We see Bowie “Keep your ‘lectric eye” on Sukita in a classic 1973 session. 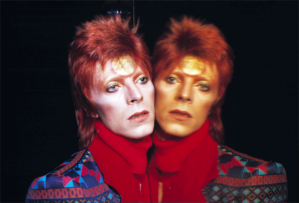 It isn’t until 1977’s Heroes shoot that David Bowie the man truly begins to reveal himself. The stylised pose on the Heroes album cover is revealed to be the aftermath of the simple act of Bowie running his hair through his fingers.

In 1989 Sukita gets up close to a Bearded Bowie, whilst 2002’s “Never Get Old” then shows Bowie being even more honest with the camera, revealing those tell-tale signs of ageing for shots taken at the time of “Heathen”. 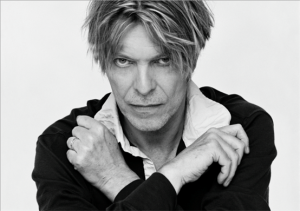 Overall this is a revealing and fascinating show.

The good news is that the photos are available to buy in limited editions – and the even better news is that Snap Galleries have catered for all budgets, including three smaller signed limited edition photographs and various tote bags, T shirts and pin badges. 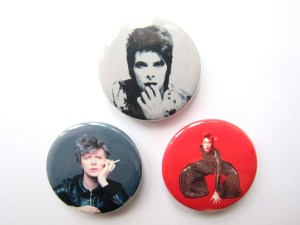 Part of the proceeds from the exhibition will go to charity: to help those who suffered in the 2011 Japanese earthquake and tsunami.

The exhibition begins concurrently with the “David Bowie Is” exhibition (you probably haven’t heard about that one), so if you are planning to go to the latter, what better way to make a day of it than to pop along to Snap in Piccadilly Arcade? You could even lunch at the nearby Wolseley or Ritz or wherever it is that impoverished rock fans congregate nowadays to get out of the Rat Race…