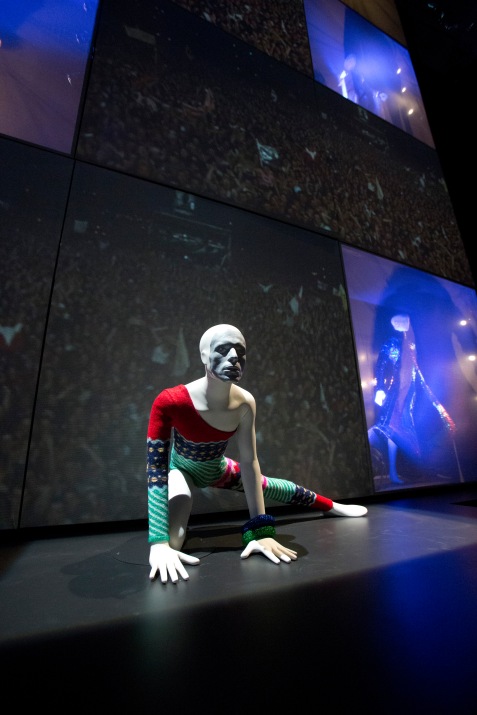 Bowie’s exhibition at the Victoria & Albert Museum recorded the most advanced bookings in the museum’s history with 26,000 tickets sold a month before the exhibition was due to open, and 42,000 a week before – some ten times more advance tickets than any prior exhibition at the V&A. Truly “it’s the best selling show...”.

The V&A’s curators have selected over 300 objects for the show from David Bowie’s own Archives, including over sixty costumes, each one more outlandish than the last.

When I bought my ticket last year, I imagined entering the museum through an enormous Labyrinth leading to the centrepiece exhibition of The Goblin King’s Codpiece. I wished for an interactive press room where the visitor can try to explain why the second Tin Machine album was a forgotten masterpiece, before seeking refreshment at a canteen which sold just red peppers and milk. When you have had a career as long and as edgy as Bowie’s, the elephant (man) in the room is just how any career retrospective can deal with some of those less obviously brilliant moments. I can only assume the above ideas were left out of the final exhibition for reasons of space.

You get your money’s worth from “David Bowie Is” the moment you step inside and are greeted by Bowie’s magnificent Tokyo Pop bodysuit designed for the Aladdin Sane Tour by Kansai Yamamoto and memorably photographed by Sukita (see my previous post for details of Sukita’s concurrent exhibition at Snap Galleries).

The audio tour plays music relating to the exhibits and works automatically depending upon where you walk – a nice touch. 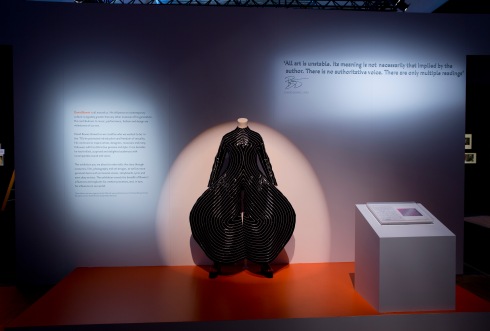 A handwritten note by Bowie tells us that the idea for “Aladdin Sane” was to create a textural and musical diary – the first of a series of works to be known as “the Nathan Adler Diaries” to be terminated in Dec 1999. Well  – you know what it’s like – sometimes ideas you had one night don’t sound so great when you wake up the next morning…

The exhibition shows us a letter dated September 1965 confirming David Jones’ stage name of “David Bowie” can be used (to prevent comparisons with Davey Jones of The Monkees) in a room devoted to examining Bowie’s roots and influences from Anthony Newley to “A Clockwork Orange”. In a spectacular projection exhibit, a piano morphs into a juke box and later a stylophone in a nod to “A Space Oddity”. We then see Bowie’s journey from suburban Bromley to the glittering lights of London as Bowie’s bedroom converts into a train carriage and takes us into Soho and swinging London. 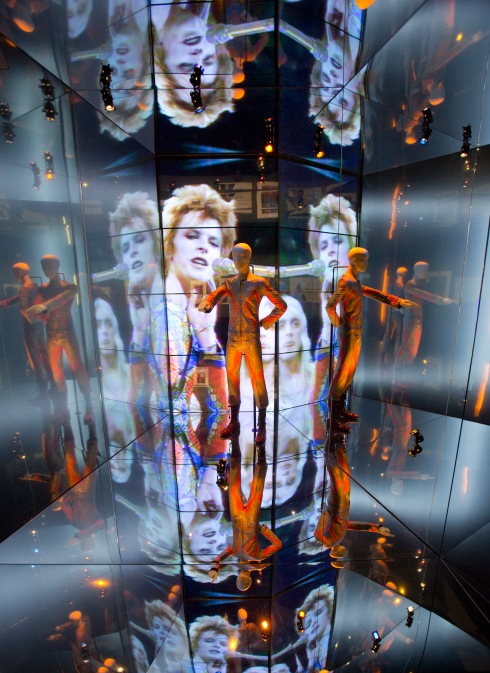 Bowie’s original (Clockwork Orange-influenced) “Starman” costume, now a little faded, is presented in front of his still sparkling 1972 Top of the Pops TV appearance. Opposite is the original lyric sheet of the song, along with “Five Years” and “Oh You Pretty Things” – indeed, the show has many such handwritten lyric sheets, complete with crossings out as lyrics were changed at the last minute.

The next room shows further costumes including Bowie’s short “bunny” bodysuit whilst a Tony Visconti created mash-up of numerous Bowie tunes (“Heroes”, “A Space Oddity”, “The Man Who Sold The World“, “Golden Years”, “Oh You Pretty Things”, “Rebel Rebel“, “Under Pressure” etc) plays out. This room also features some thoughts on Bowie’s career by Paul Morley which are presented inbetween Bowie’s album covers, so to read them you have to flick through the records, just like you do in a record store. It’s a lovely touch. The one thing that is missing? A vinyl copy of “The Next Day”. The reason? The truck that took the UK’s consignment from the factory in Germany had a (fatal) crash last week in which all the vinyl copies of “The Next Day” were damaged. They are re-pressing the whole lot as I write this…

There’s also a costume featured in this “Saturday Night Live” 1979 performance of “The Man Who Sold The World” that I had never seen before, along with Bowie’s own costume design sketches:

Guy Peellaert‘s artwork for “Diamond Dogs” (before they airbrushed it) is also on “proud” display.

Some early (rejected) ideas for “The Next Day” are displayed, including appropriating the “Pin Ups” and “Aladdin Sane” covers in a similar fashion. I think they made the right choice.

A short film “The Mask (A Mime)” made in 1969 depicts a young David Bowie finding a mask that can make him popular and famous, only for the mask to tragically become permanently attached to his face. Very prescient for a man who changed “masks” so often.

We see Bowie’s notes mapping out his vision for Ziggy Stardust, where Ziggy is “Out-hipping them at Zipp’s”. We see “Goldmine” (dropped track Velvet Goldmine”?) originally pencilled in to show “Zipp’s View” on this concept sketch. Who was “Zipp” in the Ziggy story? We don’t know. All this, meanwhile, is presented over a Ziggy Stardust mannequin which is laid to rest in a coffin-like exhibit – in state – wearing a replica Freddie Burretti suit from the album cover, made from furniture fabric. 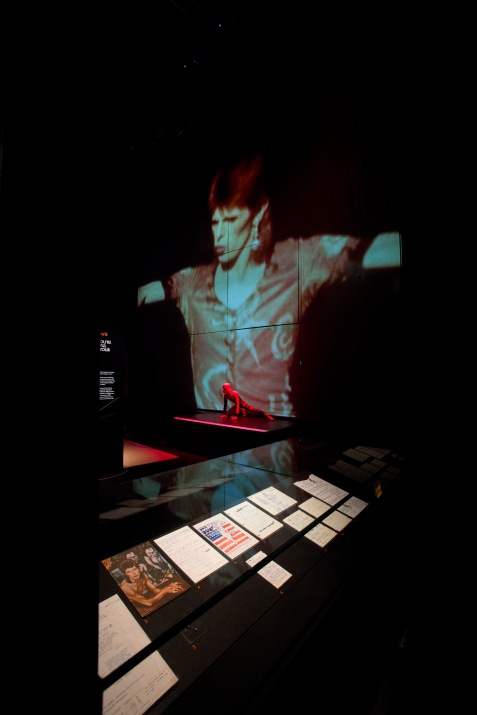 I enjoyed entering a replica sound studio, hearing the original tapes from a recording session so I could imagine being a fly on the wall.

We then see how Bowie caused the establishment such consternation as a 1973 Nationwide TV news report sneers at how the “bizarre, self constructed freak”  who was “unknown six months ago” can now afford to pay “his personal make up artist to coat his nails in silver”.

You know that weird double headed projection thing that looked like the Bo Selecta! Bear in the video of Bowie’s comeback single? It’s here.

The Pierrot costume from Ashes To Ashes? Here.

The synth he used on the recording of the Berlin trilogy? Here.

His cocaine spoon? Dammit – that’s here too. It’s quite extraordinary just how much amazing stuff is here.

The exhibition ends with performance footage from Glastonbury, Live Aid, The Diamond Dogs Tour et al, projected onto three four-storey high screens and as you watch, you realise that you are surrounded by more ghostly mannequins wearing Bowie’s costumes that you can shake a stick at, including the one-legged “asymmetric” cat-suit for which a sewing pattern was published so that fans could copy the look. Not that you would: only Bowie could carry that look off without looking ridiculous. Probably.

David Bowie Is…. on the Tube

The timing of the exhibition has been a master stroke by way of publicity for the new album. David Bowie remains in Manhattan leading his pleasant life whilst the rest of the world talks, tweets and publishes – myself included of course. After ten years, it’s just great to have something Bowie-related to talk about. Perhaps Museum shows might become a trend? Kraftwerk played the Tate Modern last month, although Napalm Death’s own recent attempt to play the V&A was thwarted due to fears the building might collapse. Perhaps the Natural History museum could run an exhibit to coincide with a Monkees reunion (see what I did there?). Radiohead at The Science Museum?  Maybe The Museum of Childhood might rustle up some One Direction dolls and put them behind a glass case at the release of their next single. Or better still, just put the band behind a glass case – it’s a thought. I’m just planting seeds…. 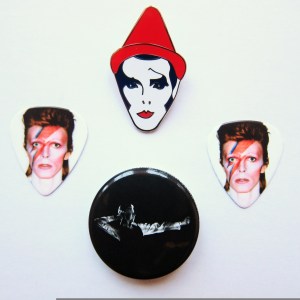 Some might say that Rock n Roll does not belong in a museum. You will not leave the V&A with the same thrill you have after seeing a great rock band play its heart out to a packed and adoring crowd, as Bowie used to do. However, the overall effect is still hugely overwhelming. It’s a sensory overload all created by just one man – with a little help from his friends – and as the proliferation of rock documentaries has frequently shown, rock n roll still can entertain when presented as social history. Rock n roll changed the world – without it we would all still be governed by an untouchable Eton-educated elite who remained in power no matter how badly they did (oh, hang on…). This exhibition shows that rock n roll still has the power to fascinate – even in a museum. It is ironic that the subject of the first such comprehensive look-back at an artist’s career at the V&A is one of the most forward-looking artists there has ever been.

“David Bowie Is” shows the many faces (and Fashions) of Bowie in a unique way – and with Sound and Vision. You’d be a fool to miss it.

The book that accompanies the exhibition is gorgeous….