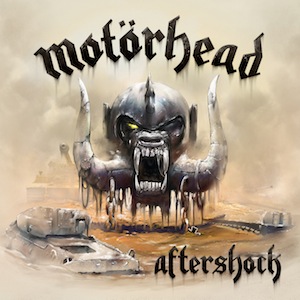 Great news: Motörhead has a new single out, “Crying Shame”, which comes from “Aftershock” – Motorhead’s 21st studio LP. It’s yet another belter.

It has been brought to my attention that there exists a terrible state of affairs that must be put right. No, I’m not talking about Keane’s last album. I’m talking about the fact that Motörhead have yet to be inducted into the Rock n Roll Hall of Fame.

That’s Motörhead. The last time I looked up “Rock n Roll” in the dictionary, it just had a picture of the band and the caption “See Motörhead”. In 1987 Motorhead even released an album called “Rock n Roll”. Lemmy himself is the Godfather of Rock n Roll, the son of a preacher man who saw the Beatles at The Cavern and was Jimi Hendrix’s roadie. Why aren’t Motörhead already in there?

They’re going to feel dreadfully embarrassed at the Rock n Roll Hall of Fame HQ when they realise Motorhead’s cabinet is still bare. It’s probably been bugging them for years. There’s a janitor there scratching his head, saying “I’ve dusted down The Beatles, The Rolling Stones and Chuck Berry, tidied up after The Who….but there’s still nothing in the biggest cabinet in the middle of the hall. I just can’t think who’s missing…”

In case you need a recap, here’s ten reasons why Motörhead should be honoured:

1. Ace of Spades. The Hall of Fame states on its website that above all else, it values musical excellence. If Motörhead had done nothing else, the band would have earned a place in the rock n roll hall of fame on this song alone. One of the Best. Songs. Ever.

2. Lemmy’s acceptance speech. You just know no matter how much he’ll resemble a fish out of water he will carry it off with some pithy remark or other. Like pointing out the fact that the Hall owe him an Ace of Spades jacket he once lent to them for an exhibition and which they “lost”.

3. The influence and legacy of Hawkwind: As a member of Hawkwind, Lemmy played (a very melodic) bass guitar on Hawkwind’s classic live “Space Ritual” album (and on many other albums). Listen to opening track “Born To Go” and then listen to Queen of the Stone Age‘s first album and tell me if you think Josh Homme might owe Hawkwind a debt of gratitude (accepting that there’s little evidence of jazz flute on any QOTSA tracks).

4. Motorhead were pioneers of thrash metal. That blend of punk and metal but with a double bass kick drum sound on Overkill was a Eureka moment for a whole new branch of metal. Despite Motörhead having more in common with the MC5 and The Ramones than Black Sabbath, no Motörhead, no Metallica.

5. Lemmy’s role in “Eat The Rich”. Don’t let the Hollywood Walk of Fame beat you to it, RnRHoF guys!

6. Because Motörhead have never recorded a bad album. Sure, some albums are better than others, but from Ace of Spades to Orgasmatron to 1916 to The World Is Yours and many in between they have produced twenty (one) great albums across four decades. And is there a better best-of compilation by any band anywhere than Motörhead’s “No Remorse”?

7. They’ve never let anyone down. There’s no nu-metal album. Lemmy never tried to rap. There’s no “industrial experiment”. Lemmy never went “glam”. From the start, Motörhead had a mission for their rock n roll music which was simply thus: “It will be so loud that if we move in next door to you, your lawn will die”. It’d be a price worth paying.

8. Motorhead’s appearance on The Young Ones’ Bambi episode. Genius.

9. For the moment at The Monsters of Rock festival at Donington in 1986 when someone threw a flare onstage at the band. Lemmy stopped the show and articulately and severely told the miscreant exactly where to stick his flare.

10. Lemmy’s penchant for a good quote. Here’s three of my favourites:

In short, I don’t think the Rock n Roll Hall of Fame has too many options. They have already inexcusably omitted Deep Purple. Without Motörhead in there, they can’t really justify using that “Rock n Roll” monicker any more. They’ll have to give it back to somewhere more deserving and revert to another title. Music Hall of Fame perhaps…?

The campaign has started. Are you for us or against us? Spread the word…

Like Loading...
‹ The Day UK Rock Fans Took Thrash Metal To Their Hearts
Ten Ways To Spot A Bon Jovi Fan In Hiding ›