Home › Music › You could buy The Oasis Box Set….but why not buy all this vinyl instead….

You could buy The Oasis Box Set….but why not buy all this vinyl instead…. 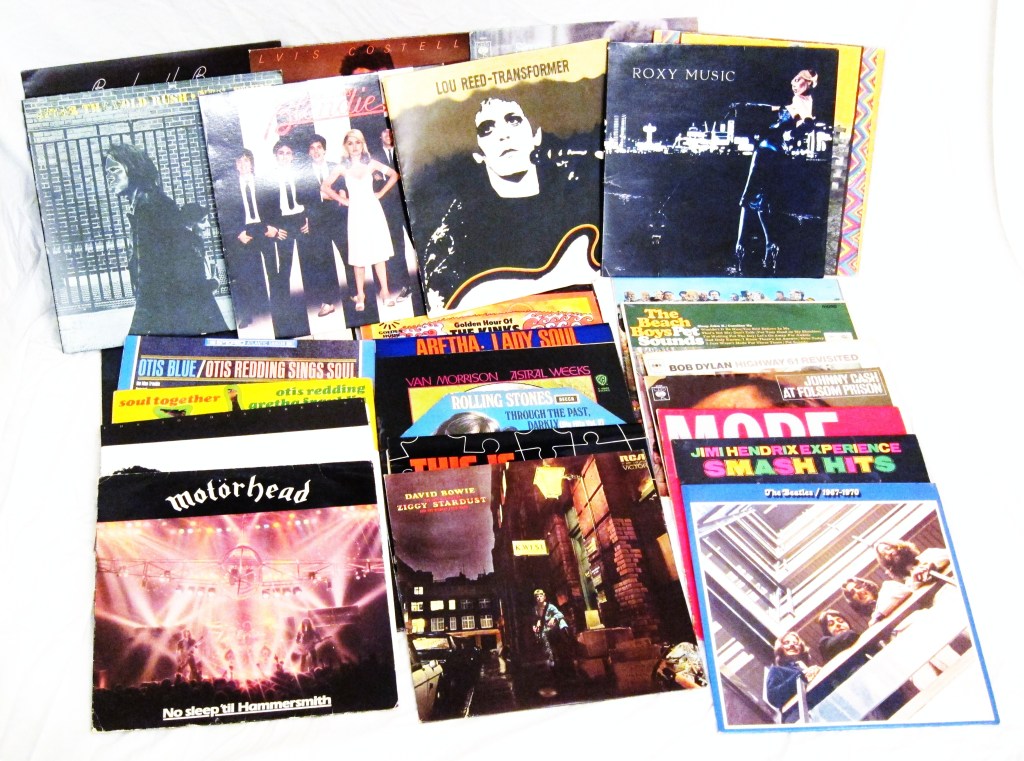 (Update: I’m on a vinyl buying spree to attempt to buy a better collection than the Oasis Box Set – click through to this link to see the first post in the series)

What remained to do, therefore, was a record-themed Supermarket Sweep, only without a cackling orange-skinned Dale Winton cheering me around an unrealistic-looking Aldi. Dismissing such unpleasant thoughts from my head, I ploughed forwards.

With Sgt Pepper, Pet Sounds and Highway 61 tucked neatly under my arm, not to mention Born To Run and Astral Weeks, it was time to build out the collection. A little determined hunter-gathering was what was required. I channelled my inner Neanderthal – never far away at the best of times, some would say – and got to it. 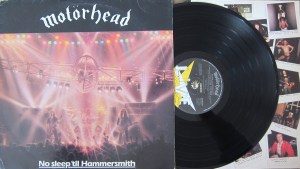 A £1 bin provided Simon and Garfunkel’s thrash metal opus “Bridge Over Troubled Water” (#51 on Rolling Stones 500 Greatest Albums of All Time list), the equally pretty and melodic “No Sleep ’til Hammersmith” by Motörhead (bafflingly unrepresented on the RS list)… 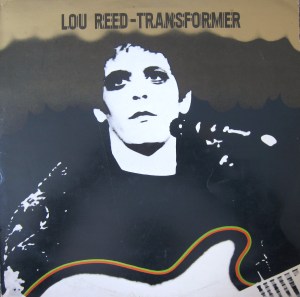 whilst £2 bought Lou Reed’s classic “Transformer” (#194 on the RS500 list) which was produced by David Bowie and features that wonderful Mick Rock photo on the cover. 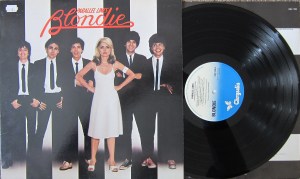 Moving up the price list to the heady heights of £3, I found Blondie’s Parallel Lines (#140 on the RS500 list) and Roxy Music’s “For Your Pleasure” (#396) albeit the latter was a reissue rather than an early pressing – first pressings are distinguishable by the pink “rim” around the Island label and tend to cost perhaps £10. No matter. It’s worth buying just for the clothing worn by the band on the inside of the gatefold cover, which somehow manages to look both ridiculous and cool at the same time.

It doesn’t hurt that it’s also a terrific album (like any of the first five Roxy albums).

Also at £3 was the “Porky Prime Cut” of Elvis Costello’s “This Year’s Model” (#98 on the Rolling Stone 500 list). On the run out groove of this album is a special secret etching which states, “Special pressing number 003. Ring Moira on 434 3232 for your special prize”. That was record label WEA’s number and Moira was Costello’s press agent. WEA’s phone lines were jammed on release of the album and WEA told George “Porky”Peckham, the man responsible for the etching, that he would never work for WEA again…

Peckham was also responsible for etchings on Led Zeppelin records and he was the in-house cutter at Apple. 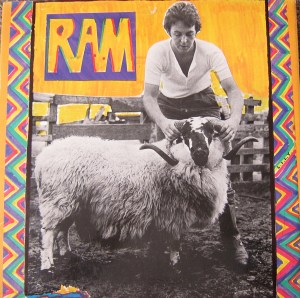 Also £3 was Paul McCartney’s “Ram” which may not be in Rolling Stones’ list but which I happen to know is one of Chris’** favourite albums. Not only that but it had a gatefold sleeve and the original Apple Records label. 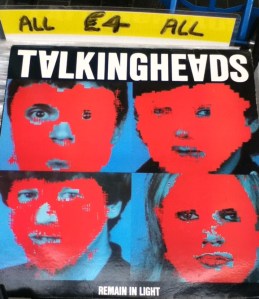 Moving to the £4 price bracket were a few albums, including Elton John’s classic Tumbleweed Connection (#458 on the Rolling Stone 500 list) complete with lyric booklet and Talking Head’s “Remain In Light” (#128), both of which I passed on, instead choosing Neil Young’s “After The Gold Rush” (#74). 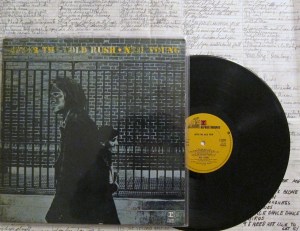 This album had a gatefold sleeve and, more importantly, a poster insert of handwritten lyrics, presumably by Young. Not every copy has this, and they tend to be more expensive, so this was a good find.

A few Beatles related finds were next. 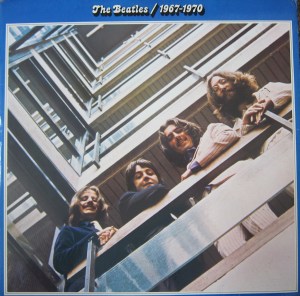 As we all know, the best Beatles album is – in true Alan Partridge fashion, “The Best of The Beatles”. I found their 1967-1970 “Blue Album” for £5, and at that price for a double album it is hard to argue against having it in the collection, even with Sgt. Pepper in there already. 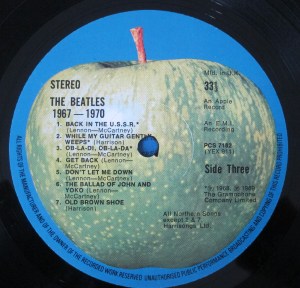 Although I didn’t find any George Harrison solo LPs for a decent price (the All Things Must Pass (#433) box set was over a tenner) I did find John Lennon’s first two solo albums for £5. Although Plastic Ono Band (#23 on the RS list) is the better album, I plumped for Imagine (#80 on the RS list) on the basis that it had the inner sleeve and poster too.

Then I saw Paul McCartney and Wings classic “Band On The Run” (#418 on the RS list) complete with poster and inner sleeve, also for £5. I know: too much Beatles at the expense of Talking Heads, but there you go….

All this time I had been keeping an eye out for some obvious omissions, including Bowie, The Who, Stevie Wonder and Jimi Hendrix. There had been plenty of Bowie albums dotted about, mainly Aladdin Sane, Station To Station, Lodger and David Live, but I was after something else…

David Bowie’s “The Rise and Fall of Ziggy Stardust and the Spiders From Mars” (#35 on the RS500 list) isn’t usually inexpensive, but I found one at last for £5. It wasn’t the earliest pressing***, but was at least nice and clean. I found a Who best of, and bought a nice copy of Stevie Wonder’s Innervisions (#24 – and a nice gatefold sleeve / Motown label) for £5 but for the collection I plumped for….. 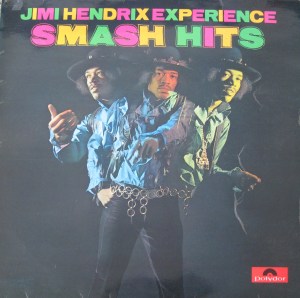 …Jimi Hendrix’s Smash Hits “best of” compilation which has a fairly eclectic selection of Hendrix tunes as it includes singles and some B-sides. I kept the Stevie Wonder album for myself!

That was it – all done. We started with this…… 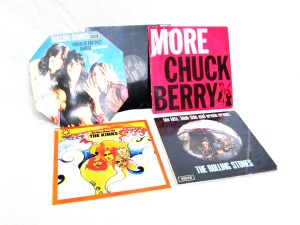 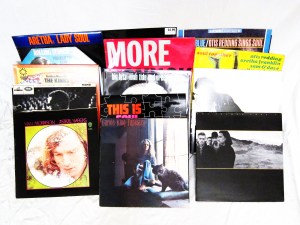 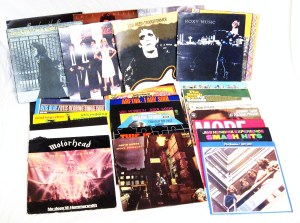 In the collection are albums from the ’50s, 60’s, ’70s, ’80s and ’90s. We have soul, rock, pop, hard rock, country, art rock, folk, new wave, rock n roll, glam, indie and singer/ songwriter genres. Record labels include Apple, A&M, Atlantic, RCA, HMV, Parlophone, Pye, Columbia, Chrysalis, CBS, Bronze, Decca, Island and Reprise. And most importantly, we have some of the greatest popular music that the world has ever produced…

I think that’s a pretty good haul, don’t you? And all for the price of the new Oasis Box Set….

In the style of South Park, I think we learned something today. Which is, the next time you see a “reassuringly expensive” box set, why not pay a visit to your local record fair, and get some *real* collectibles…

Next up, let’s hear from everyone else who has joined in the fun…