…Five Reasons To Hear The Rolling Stones No 2…

Whilst a mint copy of The Rolling Stones’ imaginatively titled second album “Rolling Stones No 2” is valued at £130 in the Rare Record Guide, most copies cluttering up the record fairs and car boot sales of the nation are as minty as a discarded piece of chewing gum, and therefore fetch half that price, or less. I secured a copy of Rolling Stones No 2 at Spitalfields Record Fair for what I considered to be a pretty fair price of £20. The cover was in great condition except for a sticker over the top right hand corner on the reverse, which someone had tried to remove, unsuccessfully. Why would someone place a sticker on the record? All would be revealed… 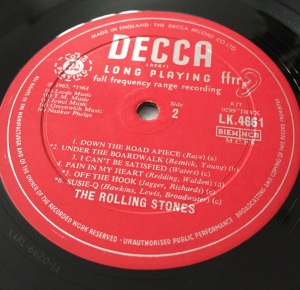 The record was a first pressing, in maroon, with the unboxed Decca label. As with the debut, Rolling Stones No 2 was released in the USA in a different form, taking the cover of “12×5” but sharing songs with “The Rolling Stones…Now!” with seven tracks taken from the UK version surviving on the latter LP.*

But the big question is Why Bother? Why buy this album on vinyl? Why buy it at all? Here are five reasons:

1. This is the best value David Bailey photo you will ever find.

The cover of Rolling Stones No 2 was taken by the young up and coming photographer David Bailey, who happened to work with Jean Shrimpton, whose sister Chrissie was dating Jagger at the time. Just like the first album, The Rolling Stones chose not to have their name on the cover, so you get to just enjoy the admittedly relatively unpleasant mugs of Jones, Richards et al in all their glory. To get a 12″ by 12″ photo by Bailey anywhere else for £20? Not gonna happen…

The then Stones manager Andrew Loog Oldham created some shudders down the spines of the establishment with his sleeve notes on the reverse of the cover. The notes, written in the style of A Clockwork Orange, jokingly encouraged fans to knock over blind men and steal their wallets to get the cash to buy the record.

A month after the January 1965 release, a Mrs Gwen Matthews, secretary of the Bournemouth Blind Aid Association, rather took offence to the suggestion that the blind might be a ready source of income for impoverished Stones fans who needed to raise cash to buy the album. Mrs Matthews was quoted in the press saying “They’re horrible.  It’s putting ideas into people’s heads. I’m writing to Decca to ask them to change the cover.”

The subject was even raised in the House of Lords – Lord Conesford asked the Director of Public Prosecutions whether the sleeve constituted “a deliberate incitement to criminal action”. 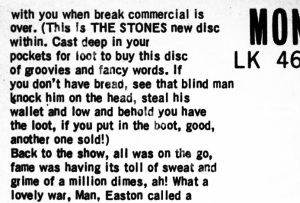 Here’s the banned text in all it’s glory. Please don’t do nasty things to the blind. I know how impressionable you all are.

Sir Edward Lewis, Chairman of Decca Records played dumb. “I am told that this inscription was meant to be humorous, but I’m afraid this jargon does not make sense to me” he said, and recalled the offending album sleeves, or – judging by my copy – on some he arranged for a sticker to be placed over the offending paragraph. I like the fact that my copy demonstrates this story, showing clear evidence of Decca’s censorship before they could re-press the sleeve. See the photos for the different versions of the album.

There is no record of any blind people being mugged for their copies of Rolling Stones No  2.

3. Chuck Berry Quota: Only one and a half songs.

My ears were still stinging from Chris’ rebuke / accusation that Stones albums are “just full of rubbish Chuck Berry covers”.

Although cover versions do dominate the track listing (as they do on The Stones’ debut album), only one song – “You Can’t Catch Me” – is written by Chuck Berry, albeit he did cover “Down The Road A Piece” and The Rolling Stones almost certainly copied Berry’s version, rather than earlier recordings by other artists, given that Berry was present at the recording.

4. The cover versions are better than in the debut album.

“Up came a white-labeled Imperial 45 bearing the artist’s name, Irma Thomas, and her devastating recording… of “Time is on My Side.” Yes, it was my good fortune to hear God two times on this first tour: once when the Valentinos literally jumped out of the grooves and into our path with “It’s All Over Now,” and twice when Irma beamed “Time is on My Side” my way.”

It’s worth hearing both these songs in their original form….

Oldham also had a say in the cover of another lesser known song, after the song’s writer had mocked The Stones’ perceived lack of skill…

“Jerry Leiber…had shown his disdain for the Rolling Stones’ R&B proficiency by suggesting we cover Alvin Robinson’s…. “Down Home Girl.” Oldham’s response to mockery was to meet it head on. “We did (cover the song).”

For some reason, “Down Home Girl”, was not a commercial success for Alvin Robinson and might otherwise have languished in obscurity. The Stones’ version is a snaking piece of RnB with Jagger’s harmonica interlinking with Brian Jones’ bluesy descending lick and Wyman’s insistent bass-line. It’s a great cover of a great song and up there with the Alvin Robinson original, which has a nice horn section.

“I Can’t Be Satisfied” doesn’t match up to Muddy Waters’ original, but Brian Jones has a good attempt at the catchy slide riff. Here’s a Spotify playlist of the original versions of the songs the Stones covered.

Aside from these cover versions, we also have evidence of a new songwriting partnership. Two strong Jagger/ Richards album tracks are present  with the best being “Off The Hook”, which had me trying to find out who did the original, only to discover it was not a cover. The other is “What A Shame” – a decent blues number which appeared on the B-side of single “Heart of Stone”.

The album does have a couple of dodgy moments. The plodding “Everybody Needs Somebody To Love” isn’t even as good as the Blues Brothers version, never mind Wilson Pickett’s or Solomon Burke’s, whilst the cover of The Drifters’ “Under The Boardwalk” sounds so lacklustre that even Bruce Willis might claim to have made a better effort.

Some of the songs were taken from sessions recorded at The Rollling Stones’ first visit to Chess Records Studio in Chicago. At these sessions, Keith maintains he saw Muddy Waters painting the ceiling, whilst Bill Wyman recalls Muddy Waters helping them with their bags. Andrew Loog Oldham describes the Chess Records sessions in hushed tones:

“2120 South Michigan Avenue housed the Chess Recording Corp. offices and studio. In two days the group put down some thirteen tracks – their most relaxed and inspired session to date – moved, no doubt, by our new-found ability to sell coals to Newcastle. Who would have thought that a bunch of English kids could produce black R&B in the States?”

“Nothing sensational happened at Chess except the music. For those two days, the Stones were finally true blues artists”.

I reported these findings back to Chris, who queried the Chuck Berry quota in particular.

“That’s one in six songs by Chuck Berry on No 2 and if you count Route 66 and Walkin’ The Dog, which I’m sure Chuck Berry also did, that’s more than twenty percent of the first two albums that are Chuck Berry covers!”

He’s good with numbers, is Chris.

* The protocol in the UK at the time was to avoid putting singles on subsequent albums, whereas the USA had no such qualms and hence their version contained “Heart of Stone” and “Little Red Rooster”.

Like Loading...
‹ How To Tell If That Rolling Stones LP In Your Attic Is Worth £1,000…
Five Reasons Why The Rolling Stones’ “Out Of Our Heads” Rocks… ›