Buying The Beatles on Vinyl 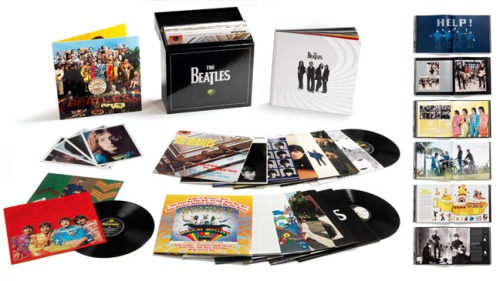 “I bet that I can buy the original Beatles records on vinyl for less than the cost of the new stereo box set on Amazon.”

The announcement made on the 27th September 2012 that The Beatles were to re-release all their albums on vinyl on the 12th November in a deluxe box set got people of a certain age (me) slightly excited at the thought of getting those re-mastered records in 180g vinyl all shiny and new.

The problem was – when I looked up the set on Amazon when they announced the launch – the price was £445. That’s right. Four hundred and forty five English pounds. During a recession. We’re all darting about diving in bins or foraging for mushrooms to feed our families and rummaging through charity shops to find an old pair of winter boots and here comes Ringo and Macca meekly seeking another few hundred notes.

I was telling my friend Chris about this problem on the day of the announcement.

“There’s always the option of not buying it, of course” he helpfully suggested.

“That seems somewhat dull, and not really entering into the spirit of the thing” I countered, “It’s probably cheaper to buy the originals though…”

“No chance” said Chris with a knowledgeable air. “Some of those records fetch hundreds on eBay. You’ve got as much chance of saving money buying the originals as I have of enjoying Mariah Carey‘s next record”.

The words sprung forth from his lips, as if thrown like a gauntlet at my feet.

“You’re on. I bet that I can buy the LPs in that Beatles Albums Box Set for less than it costs on Amazon.”

We did a quick bit of maths. Fourteen albums divided by £445 was less than £30 each. Surely that was possible?

“And the loser has to buy a Mariah Carey album and listen to it. A lot. At least ten times.”

The stakes were getting higher. The consequences of losing were becoming pretty dire.

We shook hands, and agreed the fine print. I had until we saw each other again (the 20th of October) to complete the task – just a few weeks. No stealing or borrowing records. And no bootlegs or knock-offs. They had to be original releases. “There’s a book as well. You need to get the book”.

“But it’s exclusive to the box set! I can’t get the book!”

“Then you need to find an acceptable replacement. You have to factor that in, otherwise it’s not the same”.

The Rules were starting to get more strict.

“The records have to be in decent condition too. No jumps. And they have to have a cover”.

The Challenge: Buy all the Beatles’ records on vinyl for less money than the cost of these re-issues.

I raced home and flicked through a copy of the 2012 Record Collector‘s Rare Record Price Guide to see if my impetuous bet stood a chance. How much do vinyl Beatles records cost? I didn’t want to listen to any more Carey than I had to. Sadly, it didn’t make for good reading. Here’s a brief run down of the value of the original first pressings of Beatles records:

A full set of Beatles records might therefore set me back at least £2,000!

It looked like I might have a bit of catching up with Mariah Carey to do…unless I could come up with a devious plan. It was the sort of knotty problem that Sherlock Holmes would nip off to an opium den to think through. On the basis that my opium stocks were running low, I made do with a cup of Earl Grey. The plan was this:

For Part 2 of The Beatles Bet please click here