Every Record Tells A Story Scores 100 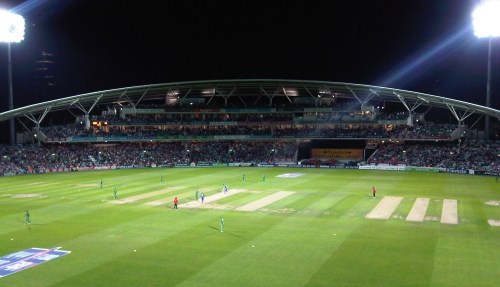 Blowers: “And with that quick single off the pads, that’s a century of posts from England’s Every Record Tells A Story. 100 up – and he’s looking delighted as he acknowledges the applause from this sell out Oval crowd”

Aggers: “Yes Blowers, and what better way to celebrate than to look back on the last fifty posts by writing a cricket-related sketch that will be almost indecipherable to Every Record’s international readers?”

Blowers: “Agreed Aggers – and indeed anyone who is unfamiliar with Test Match Special. It does look to be a bold move that risks his alienating the 360 followers who have joined him on this blogging journey, especially as I know he really appreciates everyone who has at one time or another pressed the “follow” or “like” button on WordPress, Twitter or Facebook“.

Aggers: “Well said Blowers. Well – let’s have a quick look back at that second fifty before the whole thing runs out of steam and collapses into a self-indulgent morass…”

Blowers: “Nice idea Aggers. I think having passed the fifty mark – marked by a lame Friends spoof – Every Record took stock, before nudging a nice shot for three towards the third man boundary with some vintage photos of Judas Priest“.

Aggers: “I agree Blowers. He got his eye in, survived some chin music, then started to dominate the bowling with a lovely stroke through the covers with the Dr Feelgood article. The album covers of course – haha”.

Blowers: “Heh, nice one Aggers. Just to cut in there, we have received a nice parcel from a Ms L Allen who has baked what looks like a delicious lemon drizzle cake. Fantastic”.

Blowers: “Back to Every Record’s innings then – when in the sixties he scored a fine shot off a googly through extra cover for four runs by comparing Neil Peart of Rush with Animal from The Muppets. He followed this with a few quick singles on Isle of Wight Festival headliners Bruce Springsteen, Tom Petty and Pearl Jam. I hear there are now new pictures of Springsteen in that article. Looked very muddy though – would have made for quite a sticky wicket, but probably no worse than the fifth day at Edgbaston”.

Aggers: “Yes – and I was bowled over by the list of souvenirs that readers had taken from gigs. A life size cardboard cutout of Max Bygraves was it? – he wasn’t caught out by that”.

Aggers: “Thanks Blowers. Which took him to the eighties – in posts and in time also when he talked about Magnum. I particularly liked the fact that one of the band took time to get in touch in the comments section – what nice chaps”.

Blowers: “They certainly are – and there’s a new album out too. It reminded me of the time that one of the former Shades Record Store employees got in touch after finding the article about that most sorely missed of heavy rock record stores“.

Aggers: “What about the fielding?”

Blowers: “Well I thought that Reef guitarist Kenwyn House fielded some interesting questions along with his new band members from Goldray very well in a Q&A (and also left a comment on Every Record’s Facebook page). Which took us to the climax of the innings – surviving an LBW appeal after proclaiming he had heard the album of 2012 already – Sweet Billy Pilgrim’s Crown and Treaty. To cap it all we discovered Every Record will soon be on TV having just been involved in contributing to a BBC documentary.”

Aggers: “That certainly topped off the century very nicely. It looks like he had fun out there building that second fifty.

So thank you very much for joining us on this special Every Record Tells A Story edition of Test Match Special – we really hope you will stay with us – don’t move that dial – and tell your friends.”

6 responses to “Every Record Tells A Story Scores 100”